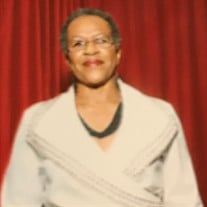 Shirley Dianne White Shockley was welcomed into the world the third child of the proud parents of Moses and Mattie White on May 19, 1950, at the Milton Medical Center, in the City of Inkster, Michigan. She received her education in Westwood Public Schools, where she attended McNair Elementary, Roosevelt Junior High, and then graduated from Robichaud High School class of 1968. Shirley went on to attend Wayne State University, where she earned a Bachelor's Degree with a dual major in Psychology and Sociology. She then received a Specialist degree from Eastern Michigan University's School of Psychology. Shirley married Frederick Douglas Shockley III in November of 1972. Together they raised two loving daughters, LaTasha and Nicole. Shirley saw to it that they would follow her example in education by admonishing them to complete their degrees. We can all agree that Shirley fought a good fight and kept the faith and didn't waver....On Friday, February 21, 2020, Shirley peacefully went from labor to reward, received her wings and is at rest with her Lord and Savior Jesus Christ. She was surrounded by her dedicated and loving daughters and grandchildren. Preceding her in death are her father, Moses White Sr., her bonus grandson Jabril Long Mitchell. Left to forever cherish her loving memories are her two daughters, LaTasha (Kevin) Livingston and Nicole Muhammad, her beloved mother, Mattie Ruth White, two sisters: LaJoyce Shillingford and Angelena (John) Smith, two brothers: Alan White and Moses Jr. (Eraina) White, uncles: Joe Pearson (Alberta), Narvelous Pearson II (Carolyn), aunts: Inez Pearson, Bernestine Blunt (Arthur), Sofronia Tee Baker, Leanne Faine (Richard), six grandchildren: Joshua, Perlee, Dorsey, Gabrielle, Adilah, Maliah. Father of her children: Frederick Shockley III, Mother-in-law: Winifred Shickley, bonus grandchildren, Kevin Jr., Tatayana (Justin), bonus great-grandchildren, Aaliyah, Treydonis and Ryliegh and along with a host of nieces, nephews, cousins, special neighbors and dear friends considered as family. Shirley will be missed immensely and life will never be the same without her presence, but her legacy will forever be etched in the lives of all who were blessed to know.

Shirley Dianne White Shockley was welcomed into the world the third child of the proud parents of Moses and Mattie White on May 19, 1950, at the Milton Medical Center, in the City of Inkster, Michigan. She received her education in Westwood... View Obituary & Service Information

The family of Shirley Dianne Shockley created this Life Tributes page to make it easy to share your memories.

Shirley Dianne White Shockley was welcomed into the world the...

Send flowers to the Shockley family.