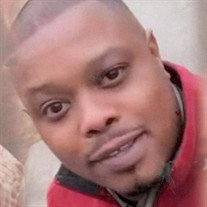 Ronnie Marrice Gray Jr. (affectionately known as Maurice) was born March 16, 1976 in Wayne, Michigan to parents Anna Johnson Gray and Ronnie Gray Sr. He was the second born of five children and growing up was considered the "protective" and "silly" brother to his siblings. He was raised in Romulus and Inkster, Michigan. Maurice attended Robichaud High School and Wayne Memorial High School. Later, he obtained his GED. While in high school, he attended Sally Esser Beauty School in Garden City, Michigan and received his cosmetology license from Bruno's Beauty Academy in Dearborn, Michigan. He was studying Energy Management and Systems Technology at Henry Ford Community College. Maurice loved God. He was baptized as a young child at Christ Temple Apostolic Church under the pastor Samuel E. Ware in Westland, Michigan. In 1993, he became a member of Spiritual Israel Church and its Army, Inkster, Michigan. There, he proposed tp former wife Loretta brown and they married in 1999, from that union four children were born. He became a Deacon there shortly after. Later, he became a member of Detroit World Outreach in Detroit, Michigan, and most recently attended Northridge Church in Canton, Michigan. Maurice was an entrepreneur who owned and operated his own hair salon "Simply Marvelous" which was in Belleville, Michigan. He then established his own clothing line "Liveaz" which was known by many in the cities of Inkster, Belleville, and other surrounding areas. He was always creating new designs and worked tirelessly doing so. He was recently working as a Roadside Assistance Technician. He was good at drawing, cooking, fixing cars, and was just an all-around handy man. He loved to invent things and had a great imagination. He was good at making people laugh and had a great sense of humor. He loved all genres of music and listen to it often. He loved his children dearly, as well as his entire family. He leaves to cherish loving memories his children, Bria, Roniece, Ronnie III, and Marriana; his grandsons Bradley, Brayden, and Breland; his mother Anna Johnson Gray; his father Ronnie Gray Sr., his sisters Ivery, Roshanna, and Angel; his brothers Jabez (Lillian), and DeJarvis; a God son Jonathan Brown; a dear supportive friend, Vicki; many loving Aunts, Uncles, nieces, nephews, a great niece, cousins, and many close friends. Proceeding him in death son Joshua Daniel Gray, grandparents Sadie and Clarence Gray; grandmother Plueanna Johnson.

Ronnie Marrice Gray Jr. (affectionately known as Maurice) was born March 16, 1976 in Wayne, Michigan to parents Anna Johnson Gray and Ronnie Gray Sr. He was the second born of five children and growing up was considered the "protective" and... View Obituary & Service Information

The family of Ronnie Marrice Gray Jr. created this Life Tributes page to make it easy to share your memories.

Send flowers to the Gray family.