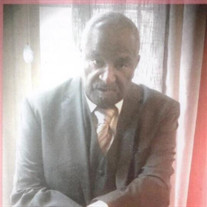 In Gordo, Alabama, on October 20, 1941, one of the Lord's divine molds was broken. This was the day, Robert " Bobby" Washington was born. His parents, the dearly departed, George and Adell Washington would soon come to know, that with this child, their legacy would always live on. At the age of 10, Bobby moved with his parents and baby sister, Virginia Washington-Walker to Ypsilanti, Michigan, were Hawkins Street became their forever home. It was in that nurturing community that he met his closest friend of 70 years, the godfather of his children, Bobby Jackson. Their church, Metropolitan Memorial Baptist, only a few doors down, became an extended supply of fellowship, family and friends for many years to come. Bobby never departed from the training set forth by his mother. It was no secret that he loved her, children, family and friends, but he also loved his Lord and Savior, as he frequently confessed," from who all his blessings flowed." As his appointed vessel, God used Bobby and his special way of spreading the good news to anyone with an ear. From 1967 to 1969, Bobby served active duty in the United States Army in Wurzburgh, Germany. As a staff Sergeant, he then served with the Army National Guard until his honorable discharge in 1979. Not long after his return to the United States, he began his 16 year tenure at Ford Motor Company where he later retired. While his methods may have led to what some deem madness...Bobby's heart was HUGE. It's a wonder how it was able to fit in his chest. What came from his heart, sure enough reached the hearts of many. Bobby never met a stranger. He gave to family and friends generously . and at times. he was compassionate to a fault. For this, his crowns in heaven are many. His unique sense of humor, selfless and sincere nature was unmatched by that of his peers. His heart and love that flowed through it was like none other. His granddaughter describes him best as encouraging and loving ...he was funny and sometimes full of energy" She goes on to attest. ' He loved him some Dawn! Dawn, his confident, his friend and his proclaimed ' last chance at love ', cared for and loved him dearly. Whether he was Bobby. Bob. Big Bob, Uncle Bobby, or Cousin Bobby, the host of those who were blessed to sincerely, and affectionately know him, have without a doubt truly loved him, for him, and will hold his memory dear. His touch is passed, burning now and forever with his five children. his heritage, his pride and absolute joy! The heads to which he swore the sun rose and set. Terrance Washington, Courtney Washington, Jeannine Washington, Simone Dixon and Bona Washington. "Big Bob" will forever be a twinkle in the eyes of his six grandchildren, Terrance Washington II, Asya Washington, Jhermanei Washington, Alena Washington Amyree Washington and Jadan Wilson. His four great grandchildren, Isiah Ware, Darletta Washington, Esme Washington and previously departed, Terrance Washington III who rests now with his Big Bob in heaven. For Bobby Washington, these are his legacy. A chosen few, left to live and grow in the seeds their father, grandfather and great grandfather planted like only he could. With this, he is not gone and never will be forgotten. Until we meet again.

In Gordo, Alabama, on October 20, 1941, one of the Lord's divine molds was broken. This was the day, Robert " Bobby" Washington was born. His parents, the dearly departed, George and Adell Washington would soon come to know, that with this child,... View Obituary & Service Information

The family of Robert Washington created this Life Tributes page to make it easy to share your memories.