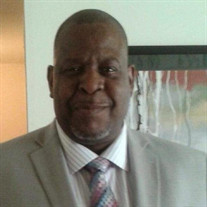 Richard Anthony Terrell lovingly known to family as “Tony” and “Big T” to his friends, was born on March 31, 1956 in Ypsilanti, MI. He was the sixth child of eight children born to Samuel “Jack” and Bessie Mae (Naylor) Terrell. Tony accepted Christ at an early age. His last church of fellowship was God’s City of Refuge in Romulus, MI where Bishop Reginald Williams was both his Pastor and friend. Tony maintained his faith throughout his life and though he’d had two physical strokes, his family never heard him complain and fondly recalled him saying “God dinged me with the stroke to save my life” and recently commenting on his stroke recovery he said “no, it wasn’t luck, but I was blessed.” While Tony never had biological children, his former wife credited him with helping her raise her son and daughter. Tony also genuinely loved his nieces and nephews who were always close to his heart. “Big T” was a true Inkster High School Viking. He played on the IHS football team and was a member of the 1974 graduating class. He was a true sportsman who loved football, basketball, and baseball. Although he loved sports, unknown to many was his indulgence in his favorite pastime - sitting in front of his big screen television watching reruns of the Gilmore Girls. Tony had a productive employment history having worked several years at Detroit Diesel and Ford Motor Company. He retired from Werner Trucking as a long-distance trucker after 20 years of service that afforded him opportunities to travel throughout the United States. Throughout life Tony always maintained a great sense of humor which endeared him to many. One of his close friends fondly described him as “truly an opinionated man with a huge heart.” Tony never met a stranger that he couldn’t engage in conversation. Tony slipped away peacefully on Sunday, June 22, 2020 catching us all by surprise. He was preceded in death by his parents Sam and Bessie Terrell, his brother Charles, sister Jacqueline (Jackie), brother Robert (Bobby), and niece Nakia (Terrell) Jones. He leaves to cherish his memory his siblings Patricia Johnston, Tanya Thomas, Tara Bradford and Sharon Holmes; and his nieces and nephews and their children: Iman, Sam (Jaxon, Austen, Landon); Nakia (Trey, Travis, Savannah, Sierra); Terah (Micah Faison); Annette (Jason Blackwell) (Nyah, Prea, Amir, Sarah) and a host of loving relatives and friends.

The family of Richard Anthony Terrell created this Life Tributes page to make it easy to share your memories.

Richard Anthony Terrell lovingly known to family as “Tony” and...

Send flowers to the Terrell family.