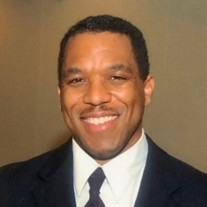 Oliver Wendell Banks, Jr. was born in Detroit, Michigan, on November 22, 1971, to Oliver Wendell Banks, Sr. and Beverly Ann Banks. He was the second of three children and 8 minutes older than his twin sister. The Banks Family attended Northwest Church of God in Christ, where Oliver received his spiritual foundation under his great-uncle, Bishop G. D. Moore. He accepted Christ and was baptized at an early age. His commitment to Christ resulted in accepting his call as a minister of the Gospel. Oliver attended Inkster Christian Academy and was also educated in the Detroit Public School System. He graduated with honors from Cass Technical High School in 1989. He continued his educational journey at the University of Michigan, graduating in 1994 with a Bachelor of Science Degree in Chemical Engineering. He also received a Master of Business Administration Degree in 2010. He was a proud member of the University of Michigan Alumni Association and was often seen wearing his Maize and Blue UofM cap. Oliver was employed as an Environmental Engineer at General Electric in Indiana and a Production Engineer in New York. He furthered his career at General Motors as a Product Release Engineer. He also worked as a Project Engineer for Injectronics and Collins & Aikman, here in Michigan. Additionally, he shared his expertise as a Math and Science Teacher at King Academy. Oliver loved to volunteer and support charitable organizations. His activities included volunteering at Life Academy in the Math Teacher Enrichment Program at the University of Michigan. He also volunteered at Operation Helping Hand. He was a loving and devoted caregiver for his mother. Oliver’s generosity and kind heart will be missed tremendously! Oliver was an avid reader. He loved collecting comic books. He also enjoyed watching “Jeopardy” and “Wheel of Fortune.” He was always willing to assist with his young niece and nephew's educational needs. He would often call family and friends to talk or give encouraging words. Oliver received his final call from the Lord on Tuesday, December 8, 2020, at approximately 6:50 p.m. He was preceded in death by his parents, Elder Oliver Banks, Sr., and earlier this year, his mother, Beverly Ann Banks, as well as a special uncle, Bishop Isaac King, Jr. He leaves to cherish his memory, two sisters: Cherie Lynette Goodlow and his twin, Silliver Michelle Edwards; two brothers-in-law: Dr. Gerald Ross Goodlow, Sr. and Tyrone Edwards; nieces: Jennifer Cherie Goodlow, Rachel Lynette Goodlow and Rieana Cherie Edwards; nephews: Gerald Ross Goodlow, Jr. and Tyrone Markel Edwards, Jr.; and a host of other relatives and friends.

Oliver Wendell Banks, Jr. was born in Detroit, Michigan, on November 22, 1971, to Oliver Wendell Banks, Sr. and Beverly Ann Banks. He was the second of three children and 8 minutes older than his twin sister. The Banks Family attended Northwest... View Obituary & Service Information

The family of Minister Oliver Wendell Banks Jr. created this Life Tributes page to make it easy to share your memories.

Send flowers to the Banks family.