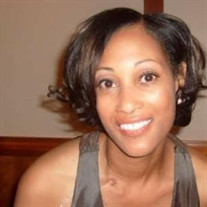 Nicole Yvette Shaw was born December 2, 1966 in Wayne. Michigan; the first of three children of Josephus Wade and Ethel Louise Shaw. She was brought home from Annapolis Hospital on Christmas morning and placed under the tree because she was a special gift from God! Nicole was undeniably a Daddy's girl, she was the center of his world. She mutually adored him and lavished him with the finest on haberdashery and treated him with the exquisite pleasures of life. She was equally devoted to her loving and creative mother, always going above an beyond to make her smile and provide for her well-being. For 53 years Nicole proved again and again just how special she was, evidenced by the joy and sunshine she brought not only to her family, but to every life she touched!! Nicole was afflicted with illness during her childhood, yet she demonstrated a lifestyle of unparalleled strength and perseverance. She graduated from Bishop Borgess High School and earned both her Bachelor's and Master's Degrees from Eastern Michigan University and Central Michigan University respectively. She worked in a professional supervisory capacity at the Chrysler Corporation where she fondly respected as a warm, yet focused and visionary leader. Unyieldingly, Nicole faced health challenged like a championship prize-fighter and pushed through every obstacle with fortitude and determination. Despite her personal ailments, she was the primary caregiver for her maternal grandmother and assisted in providing care for her paternal grandparents too. Before treatment, during treatment, after treatment, it didn't matter; Nicole was there for anybody and everybody all the time, always gracious, always giving. When she established Blessings from Heaven to raise funds for the National Kidney Foundation, it was just another example of the sacrificial life she lived in service to others. Nicole was unstoppable, had no limitations, and refused to allow others to stifle her experiences. She enjoyed traveling, bicycling, running marathons, and of course shopping. Nicole was a fashionista and was often mistaken for a supermodel. While living in California she was hobnobbed with celebrities (like the Grammy's), Nicole was a VIP and didn't mind bringing her friends along. She was a party planner extraordinaire, always creating reasons to celebrate (Her motto was: "Got a new fingernail, time to party!") She was best often described as classy and beautiful, ultra stylish and polished in every way...boss of all bosses, loyal confidante, and best friend, Nicole was THAT GIRL, wanting and giving nothin but the best! Nicole was affectionately called "Auntie Nic" by her biological nieces and nephews and everybody's kids! She was their #1 cheerleader at athletic events and elementary through the NFL. At each of their academic award programs, artistic performances, birthdays, graduations, you name it, she was there bearing gifts and extending heartfelt congratulations. Family and friends were the utmost importance to Nicole. She loved hard and felt deeply about her sister Rona, brother Anthony, and sister-in-law Cassandra. However, her life was enriched and tremendously blessed when she met and married (August 1, 2009) the love of her life, her rock, her strong warrior, the man that met her well, married her sick, and changed her name to Mrs. James Reid Jr. Words could not adequately express the adoration and appreciation she had for her husband; therefore, in her quick-witted manner, she playfully referred to J.R. as the only man she loved more than the Artist, formerly known as Prince. It is no secret that Nicole's endurance was empowered by her belief in and commitment to her Lord and Savior, Jesus Christ. She was a Godly woman of great faith with an unwavering dependence on and trust in His Sovereignty. She was a generous contributor and active member of Triumph Church where she faithfully served in both the Hospitality and Music Ministries. Nicole Shaw Reid transitioned to heaven on March 7, 2020. She was preceded in death by her grandparents: Robert and Janie Grosse and Deacon Lomas and Dr. Emmale Shaw. She leaves to cherish her memory her husband: James Reid Jr., parents: Josephus and Ethel Shaw; siblings: Rona and Anthony (Cassandra) Shaw; niece and nephews: Jayelynn, D'Anthony, Elijah, Joshua, and Jeremiah Shaw; great-niece Jayia, godchildren: Zion Johnson and Quentin Johnson; bonus son James Hornbuckle (and his daughter Mariah; parents-in-law Dwight and Sharon Gleton; sister-in-law Tamika (Andre) Besteder and Stephanie Johnson; aunts, uncles, cousins, a host of relatives, and her GIRLS!

Nicole Yvette Shaw was born December 2, 1966 in Wayne. Michigan; the first of three children of Josephus Wade and Ethel Louise Shaw. She was brought home from Annapolis Hospital on Christmas morning and placed under the tree because she was... View Obituary & Service Information

The family of Nicole Reid created this Life Tributes page to make it easy to share your memories.

Send flowers to the Reid family.