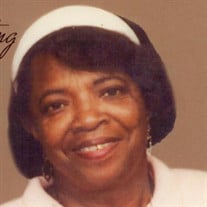 Jennie B. Austin was born on July 8,1934 in Marianna, Arkansas to the union of the late Pastor Henry Farmer and Lucille Ren. Jennie affectionately known as Jennie B., Big Momma, Mom, Aunt, accepted Christ at a early age. She attended Marianna Public Schools during her time in Arkansas. She met her former late husband Robert Lee Austin. Jennie has several children during her time in Arkansas Jennie had 11 kids, she decided to move to Michigan in the early 60's to find a new home for her and her kids. Jennie enjoyed moving around in any state or city. Jennie had several hobbies, she loved fishing, the dog tracks, listening to the blues. Most of all, she loved traveling along with fun camping trips, relocating was her thing. She would pick up and move to any place she wanted while living in Michigan. She decided to move to Denver, Colorado to be with her Dad, helping her sisters Margaret taking care of him. Jennie enjoyed being in Denver, she made sure her kids were at church, she introduced them to Christ at an early age by making sure that they were at every program at church they played a part in. Nevertheless she always took care of them all especially her daughter Mary Lou she was her road running partner they were like to peas in a pod inseparable. Jennie later married her husband George Martin, who was great partner. Mr. George everyone called him they enjoyed eating out soul food, was their favorite going fishing was always a option. Jennie enjoyed life to the fullest. Jennie leaves to cherish her memories: her children Mary Lou, Michael (Pastor Rachelle), Carolyn, Leola, Alfred, Erwin, Wanda, Sherry (Michael Waters), and Loretta; and a host of grandchildren, great-grandchildren, and great-great grandchildren, nieces, friends and loved ones who loved her dearly. Her loved ones who preceded her in death: mother Lucille, her father Rev. Henry Farmer, her three siblings Redell, Margaret and her brother L.C., son Robert Lee, daughter Lillie, niece Linda, granddaughter Siva, granddaughter Tierrie, grandson Daniel, grandson Alfred Jr., granddaughter Robin, great-grandson baby Pirelle, great-nephew Marcus and granddaughter Tina Redell.

Jennie B. Austin was born on July 8,1934 in Marianna, Arkansas to the union of the late Pastor Henry Farmer and Lucille Ren. Jennie affectionately known as Jennie B., Big Momma, Mom, Aunt, accepted Christ at a early age. She attended Marianna... View Obituary & Service Information

The family of Jennie B Austin created this Life Tributes page to make it easy to share your memories.

Send flowers to the Austin family.