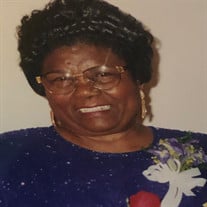 Irene Franklin was born on March 16, 1925 in Pine Bluff, Arkansas to the late Steve and L.E. Walls. She was the second of ten children. She accepted Christ and was baptized at St. Luke AME Baptist Church at a very young age. Irene graduated from J.C. Corbin High School. Then moved to Detroit, Michigan with her sister Juella and brother-in-law Leroy Cannon, where she met and married her soulmate Moses Franklin on October 5, 1946. To that union 10 children where born. Irene had unconditional love for her children. She made sure the family came together every holiday-a tradition. She loved cooking, but her signature was sweet potato pies and cornbread dressing; the best ever! Irene was a member of New Galilee Spiritual Church and later went on to be a member of New Hope Missionary Baptist Church. Irene was a Christian woman and had strong faith in God. When someone would ask her to pray for them about any issue her and her sisters Selma and Juella would take it to the water (Belle Isle). Irene was a businesswoman with a strong entrepreneurial spirit. She was a representative for Stanley, Avon, and Amway products. She later went on to sell suits for men. After making the brothers look good, she soon realized that she wanted to do something for the sisters, so she started selling wigs. But she wasn't through with people just yet; Irene got her broker license and went on to sell real estate becoming one of the top selling agents for Carl Collins Reality. She worked hard to help he husband provide for their family and many others. Irene never stopped, she was a lover of people, and she believed in helping people. In the early 1970's she owned and operated the Safari Roller Rink in Inkster, Michigan. She would hire kids in the neighborhood to work. She would always say get the "baddest kids" off the street and give them a job to keep them out of trouble. If ten kids weren't enough, Irene was there for so many others, feeding, clothing, giving advice, financial support, and prayer. Always giving. Her favorite scripture was Philippians 4:8-9 and if you lost something, she would tell you to read the 23rd Psalms. Irene departed this life in the arms of her family on June 22, 2019 at 11:35 pm (the actual time and day). She died of natural causes. She will be loved and missed and will remain in our hearts forever. Her husband Moses Franklin, her daughters Renee Bell, Doris Kirkwood, Patricia Williams, her sons Donald and Steve; granddaughter Dionne Franklin; grandson Joseph Franklin; her sisters Flossie Walls and Juella Cannon and brother Andrew Walls preceded her in death. She leaves to cherish her memories four daughters: Jeanette (Sam) Kirkland, Brenda (Kenneth) Daniels, Angela (Richard) Donald, Cheryl, one son Keith (Gail), four sisters Selma Moore, Inez Dunning, Idell (Herman) Lewis, Hattie McKinney, two brothers L.C. Walls (Lula) and Felix Walls; 23 grandchildren, 40 great grandchildren and 12 great-great grandchildren. A host of nieces, nephews, cousins, and friends.

Irene Franklin was born on March 16, 1925 in Pine Bluff, Arkansas to the late Steve and L.E. Walls. She was the second of ten children. She accepted Christ and was baptized at St. Luke AME Baptist Church at a very young age. Irene graduated... View Obituary & Service Information

The family of Irene Franklin created this Life Tributes page to make it easy to share your memories.

Send flowers to the Franklin family.