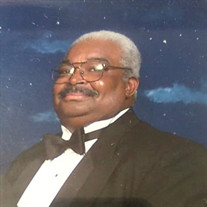 Garnett Langston Hegeman, Jr was born on July 4, 1936 in Detroit, Michigan to Hazel and Garnett L. Hegeman, Sr. He was the second child and first son born to this union. He was baptized as an infant but accepted Christ at an early age. He served as an acolyte from ages 7-18 at St. Matthews Episcopal Church in Detroit. He strongly considered entering the ministry and becoming an Episcopal priest after graduating from college. He grew up in Ecorse and attended The Ecorse Public Schools and was very active in many school activities, including Student Government, Tennis, Football and Marching Band to name a few. Upon graduation from high school he was awarded the full Ford Foundation Academic Scholarship to attend any university of his choice. He was accepted to Harvard, Notre Dame and the University of Michigan – where he chose to attend. Initially, he a pursed pre-medical curriculum but chose to pursue a career in education to become a teacher, like his mother and father. He started his teaching career as a junior high school math teacher and in his second year became the Head of the Science and Math department. He also became a Critic Teacher for teachers in training from Wayne State University, the University of Michigan, Eastern University and Central Michigan University. He was awarded the National Science Foundation Scholarship in 1967 to study oceanography and geology at the University of Southern California and in 1968 to study field geology in at the University of Texas, El Paso. In 1969 he became the principal of Inkster Public Schools’ largest elementary school and 2 years later as the principal of Inkster High School. In 1979 he became the Superintendent of Inkster Public Schools, becoming the longest serving superintendent of the district, retiring in 1989. After only 7 weeks of retirement, Garnett chose a new career as Court Administrator and Magistrate for the State of Michigan’s 22nd District Court in Inkster. Garnett truly loved his family, his wife, children, grandchildren and great-grandchildren. He adored them and made it a priority to spend as much time with them as he could. The family enjoyed traveling in their motorhome during Summer, Christmas and Easter vacations. Fulfilling a life long dream he and his wife drove to Alaska in 2000. He is survived by his wife of 54 years, Rosa, his son Garnett, III of Toledo, OH, three daughters; Wynona Caldwell of Somerset, NJ, Kathryn Hegeman of Farmington Hills, MI and Rozelle Hegeman-Dingle of Rochester Hills, MI, seven grandchildren, Shana Shepherd, Thomas Caldwell, Michael Hegeman, Malcolm Hegeman, Ryan Dingle, John Dingle and Christopher Bryant; two great-grandsons, Joseph and Matthew Shepherd and several nieces and nephews, cousins and a host of other relatives and friends. His sister Florence McClain and brother Charles Hegeman pre-deceased him. He will best be remembered by his passion for education, his kind, generous and caring ways and how much he loved and cared for his family. “In lieu of flowers please make donations to the American Lung Association. Due to the pandemic, we will not be holding any services at this time but hope to have a memorial service in the future."

Garnett Langston Hegeman, Jr was born on July 4, 1936 in Detroit, Michigan to Hazel and Garnett L. Hegeman, Sr. He was the second child and first son born to this union. He was baptized as an infant but accepted Christ at an early age. He served... View Obituary & Service Information

The family of Garnett L. Hegeman Jr. created this Life Tributes page to make it easy to share your memories.

Send flowers to the Hegeman family.