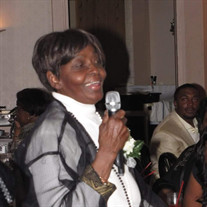 Mother Irene M. Chapman was born in New Bern, North Carolina on July 16, 1934 to Horace and Mabel Chapman. She was the second child born to this union. She departed this life on Sunday, April 5, 2020 at the age of 85. Irene confessed and gave her life to Christ at an early age. Irene was a member of Congregation Beit Faith Ephraim for 7 years under the leadership of Pastor Michael Laws. She was also a member of People Community Church under the leadership of the later Pastor Steward. Irene was involved in the Seniors Club and was a Youth Sunday School teacher. Irene attended early education in the Catholic School System. In 1953, she migrated to Detroit, MI. While here, Irene worked for AL Hamburger Restaurant as a waitress to put herself through Beauty College in 1962. She graduated from Bee Dew College of Beauty earning her Cosmetology License. Even though she worked in a few Beauty Parlors, Irene ended up being an entrepreneur. In June 1964, Irene wed John (Bo) Jackson. To this union no children were born. In 1973 Irene was employed at Chevrolet Gear and Axle for 17 ½ years. While working there, Irene received her High School Diploma and took some College courses after retirement. She also gained other jobs, working for Detroit Public School System in 1990 as a Bus Attendant. Known throughout her neighborhood as (Miss Irene) people loved her, children loved her, and she enjoyed being with her great grandchildren. Irene was willing to help people whether it was feeding people or giving them a place to stay; her home was never empty. She never turned away a hungry mouth. She is preceded in death by her parents, two brothers, and one sister. She leaves to cherish her legacy, her one and only daughter Almetta P. Wilson (Bennet), 5 grandchildren Tanya, Sharna (Randall), Dana (Rick), George Jr. (Dana), Loren of Clearwater, Florida and Earl (Rita) of Baltimore, Maryland. 10 Great-Grandchildren. Ozias (Lynnyell), Anthoni, Rayinnund, Christopher, Brittani, Jamesa, Justin, Darrell, Orlando and Raven (Her dollbaby). 6 Great Great Grandchildren Kaiyuna, Jayse, Noel, Skylar, DeMari, A’lylah. One brother Horace J. Chapman of New Bern Carolina, one sister Mabel Byrd of Michigan City, Indiana. 6 special friends Brenad Royal (Best Friend) Dorothy, Daisy, Jean (Apple) Aretha (who preceded her in death) and a host nieces, nephews and other relatives and friends.

Mother Irene M. Chapman was born in New Bern, North Carolina on July 16, 1934 to Horace and Mabel Chapman. She was the second child born to this union. She departed this life on Sunday, April 5, 2020 at the age of 85. Irene confessed and... View Obituary & Service Information

The family of Irene Chapman created this Life Tributes page to make it easy to share your memories.

Send flowers to the Chapman family.