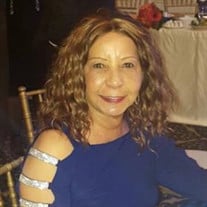 Yvonne Barden Penn was born in Eastman, Georgia on March 16, 1941, to the late Milton and Hortense (Hamilton) Barden. She was a number eight of thirteen children and lovingly called "BeBe" by her family and close friends. Yvonne attended Inkster High School in Inkster, Michigan and later attained a BSN and a Masters degree in Nursing. As a registered nurse in New York, she held an esteemed positioned in the surgical operating room. She was in the healthcare field for over 30 years before moving to Michigan to work closely with her brother Don at Barden Cablevision. Yvonne met and married her late husband James Penn on September 17th, 1988. They enjoyed traveling to many places but their favorite was Acapulo, Mexico. This trip became an annual tradition with their family and friends, which lasted over 25 years. Yvonne loved the Lord and accepted him as her personal savior. Anyone who came into her life and her house knew and witnessed her love for God. Several plaques on her wall read: "Christ is the head of this house, the unseen guest at every meal, the silent listener to every conversation" and "As for me and my house we will serve the Lord." Her voicemail message ended with ended with her favorite scripture, "With God ALL thigs are possible." She enjoyed dancing, in her youth, she and her brother Don competed and won several dance competitions. She also enjoyed playing cards and going to the casino (particularly MGM which she jokingly called "the gym"). She was also known for collecting beautiful elephants, but the tusks had to be up. Yvonne was an active member of the Alpha Kappa Alpha Sorority Incorporated. Yvonne loved her children, grandchildren, great-grandchildren, siblings, nieces, and nephews. Each and every one of them loved her and can tell their own story of how she enhanced their lives. She gave her flowers to those she loved while they were living. Yvonne Barden Penn went to be with the Lord on Thursday, August 8, 2019. we were all shocked and feel she left us too soon. But we all love and serve God, and we know he does not make mistakes. He determined it was time for her to come home. She leaves to cherish her memory: three children: Alvina Broadnax (Harvey), Mark Carter Sr., and Shanta Wade (Winston); nine children; Thais Hall (Carlos), Mark Carter II (Ronneshia), Khelli Goree (Joseph), Desiree McCray, Steven Walker, Winston "David", Sean Walker, William Wade and Deja Rush; nine great-grandchildren. She also leaves her six of her siblings Douglas Barden (Betsy), Carl Vinson Barden (Mary), Helen Robinson, John Barden (Janice), Verna McDaniel (Timothy),, and Jacqueline Baker (Terry), and brother-in-law Robert Penn (Bernadine), and a host of nieces, nephews, cousins and many other relatives and friends.

Yvonne Barden Penn was born in Eastman, Georgia on March 16, 1941, to the late Milton and Hortense (Hamilton) Barden. She was a number eight of thirteen children and lovingly called "BeBe" by her family and close friends. Yvonne attended Inkster... View Obituary & Service Information

The family of Yvonne Barden Penn created this Life Tributes page to make it easy to share your memories.

Yvonne Barden Penn was born in Eastman, Georgia on March 16,...

Send flowers to the Penn family.