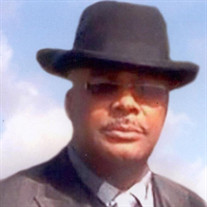 Willie Leon Watts was born September 13,1956 in Ypsilanti, MI to May Sue Watts and Andrew Watts. Although he grew up in Inkster her attended and graduated from Robichaud High School, where he met the love of his life, Deborah. They began their relationship at 13, and ere together for 51 years, married for 44 years. He was a kind gentleman who walked Deborah home from school every day. They were married in front of the Lord on September 3,1977, and in that union they had 4 beautiful daughters. His hobbies included fishing, watching football, movies, listening to music and spending time with his family. He loved to sing and sang to his grandkids all the time. Willie was a man that once you met him, you would never forget him. He had a strong and dominating personality and his aura shined bright whenever he was around. He was kind, loyal, generous and was never one to bite tongue. He could talk to anybody about anything all while sitting in his chair, playing on his laptop and eating gummi bears. He found Christ and was always willing and eager to teach what he knew. His brilliance is undeniable. He spent time in the US Army before retiring from Ford Motor company after 30 years, but still insisted on staying busy so he did various security jobs. He was a 100% real man who loved his truck and loved his wife and family above all. He leaves to cherish his memory: his loving wife, Deborah. His four children: Sheila Booker (Lionel), NaTasha King (Greg), TaWanna Tyus (Carl), and Courtney Watts. His ten grandchildren: Cherelle, Chanel, Tyra, Mariah, Willie II, Carlito, Carlos, Mya, Mia and Janayah. Three great-grandchildren: Vale, Noah and Khalil. His siblings: Andro (Eva) Robert (Lisa), Dennis (Cassandra), Eleanor (Lorenzo), Andrew (Faye), Vivian Arline, Cynthia (Keith). His stepmother, Thelma Watts. His mother-in-law, Geraldine Wright; 2 sister-in-law, Cheryl and Cynthia, and 2 brother-in-law, Willie (Mikki) and Tyrone (Michelle). Longtime friends, Chris, Lee, Mark, Coon, and Leonard, and a host of aunts, uncles, nieces, nephews and friends. He was preceded in death by his parents, Andrew Watts and May Sue Watts; 2brothers Adolphus and Calvin; his father-in-law, Willie Wright Sr.; his brother-in-law Tim Benton and his brother-in-law and best friend, Kenny Russell.

Willie Leon Watts was born September 13,1956 in Ypsilanti, MI to May Sue Watts and Andrew Watts. Although he grew up in Inkster her attended and graduated from Robichaud High School, where he met the love of his life, Deborah. They began their... View Obituary & Service Information

The family of Willie Leon Watts created this Life Tributes page to make it easy to share your memories.

Send flowers to the Watts family.