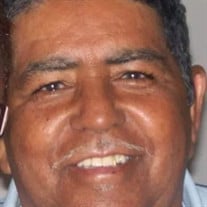 Willie James Rachal, Sr., was born July 29, 1943 to the late Frank Rachal, Sr. and Emma Lee Fowler Rachal in Natchitoches, Louisiana. Willie accepted Christ and was baptized at an early age. Willie departed this life on Sunday, January 16,2022 following post operative complications. Willie grew up in Natchitoches, Louisiana as the oldest of seven siblings. He graduated from Central High School and later moved to Inkster, Michigan. He started working at Ford Motor Company where he retired after 30 years. While employed at Ford Motor Company he also worked as an Inkster Auxiliary Police Officer, where he co-pioneered a motorcycle training platform. Following 10 years of service to the Inkster community, he retired as a Captain and later returned to serve as an Advisor to the Inkster Auxiliary Police Department for several additional years. Willie was a kind-hearted person, always willing to help others when he could and always enjoyed socializing with his neighbors. Willie James Rachal was handsome and he didn't wait for others to acknowledge it! In his younger days he loved to dress to impress! Most of his life he spent time communicating on the CB radio with his handle being "Smooth Black". As he matured, he became a lover of all things outdoors...always owning a RV and traveling to his favorite destinations, never missing an opportunity to return to his hometown. He was preceded in death by his parents as well as, his two brothers Charles Rachal and Frank Rachal, Jr.; and his two sisters; Dorothy Griffin and Mazie Rachal. He leaves to cherish his memory his life partner Roberta (Tina) Mason, his children; Willie (Jeri) Rachal Jr., Jennifer Rachal, Gwendolyn Rachal, Joshlan Stephen, Stephanie Rachal and Emily (Dwight) Sandifer. he leaves to cheris his memory to brothers; Calvin (Mary) Rachal, Joe (Pete) Elie and two sister Virginia (Cloi, Sr.) Taylor and Brenda Burns. A bonus brother Johnny Bright. A special God-Daughter Kizzy Sandifer. He leaves 15 grandchildren. a host of uncles, aunts, nephews, nieces, cousins and numerous friends.

The family of Willie James Rachal created this Life Tributes page to make it easy to share your memories.

Send flowers to the Rachal family.