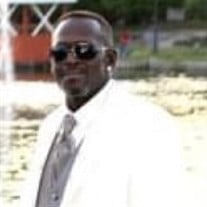 Willie Lewis Poole Jr. was born on September 1, 1959 to the union of Mary Joyce Poole and Willie Lewis Poole Sr., in Ypsilanti, MI. Willie accepted Christ at an early age and was baptized at the age of 11 years at Community Church of God in Ypsilanti, MI. He sang in the choir and was on the church basketball team. Willie had three sisters; Sandra, Deborah and Joyce. During childhood, Willie had a great time hanging out with his sisters and cousins, as they went on many family road trips and made many memories to cherish. Willie attended Romulus High School and graduated in 1977. He attended Washtenaw Community College as he studied respiratory therapy. He worked at Oakwood Hospital as a respiratory therapist. In 1984, Willie enlisted into the U.S. Army where he served as a combat medical specialist. He earned the Marksman Badge and Army Achievement Medal. Willie was a proud Persian Gulf War Veteran. On December 23, 1978, Willie married his beautiful high school sweetheart, Patricia Searcy. As children, Patricia and Willie were next door neighbors. From their union, they were blessed with five children: Jamaal, LaToria, Demequa, Roderick and Whitney. Willie enjoyed spending time with his lovely wife Patricia and always wanted to see his children and grandchildren happy. He was happiest when he shared a dance with Patricia and bought her beautiful glass roses. His wife, children and grandchildren were his pride and joy. Willie was called “Paw-Paw’’ by his grandchildren. He often wore a shirt that said, “I asked God for Strength and Courage, he sent me My Wife. I asked God for an Angel, He Sent Me My Kids.” While serving in the Army, Willie traveled with his wife and children overseas, and lived in the country of Germany so that he could keep his family together. Family, honor, integrity and pride were his core values. Willie’s hobbies included watching basketball and football games and rooting for the Detroit home teams. Other hobbies included playing Dominoes and shooting pool with his family and friends. He was known by the nickname,” Styles P.” His favorite catch phrase was, “HOLD UP!” Willie departed this life on November 21, 2021. Willie is predeceased by his parents, Mary Joyce Poole and Willie Poole Sr.; and his sister, Deborah Poole. He leaves to cherish his memory: Patricia Poole, his wife of 42 years. Five children: Jamaal Poole, Latoria Poole, Demequa Poole, Roderick Poole and Whitney Poole. Twelve grandchildren: Ailiek, Briyana, Azaria, Jamaal, Jamiyah, Bryan, Darecia, Brayden, Bella, London, Benjamin and Bentley. Two great-grandchildren, Lono and Zuri; and a host of aunts, uncles, cousins and friends.

Willie Lewis Poole Jr. was born on September 1, 1959 to the union of Mary Joyce Poole and Willie Lewis Poole Sr., in Ypsilanti, MI. Willie accepted Christ at an early age and was baptized at the age of 11 years at Community Church of God in... View Obituary & Service Information

The family of Willie Poole created this Life Tributes page to make it easy to share your memories.

Send flowers to the Poole family.