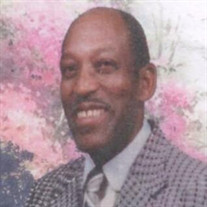 Mr. Willie Hanson was born in Sharon, Georgia on September 8,1919 to the union of Cap Hanson and Lola Hughes Hanson. He grew up on his parent's 60 acre farm where the raised cotton, corn, sweet potatoes and peanuts. His parents, brothers Jessie and Jimmy and sister Loretha (Hanson) Wolf preceded him in death. Willie was educated in the Sharon Public Schools and attended until 1938. Willie answered the call to duty during World War II and joined the U.S. Army on January 22, 1941 and proudly served until June 21, 1945. He worked his way up from Private to 2 PFC Rifleman to S Sergeant Squad Leader. In 1948, he met and married the love of his life, Lydia Margaret Cunningham (now deceased) and their union lasted 50 years, 5 months and 3 days. Being a young man whose feet were grounded in Christianity from his early childhood, he continually made the church the center of his life. He joined New Hope CME Church in Sharon, Georgia in 1936 and in 1955, he and Lydia became members of St. James Methodist Episcopal Church (now St. James United Methodist). His membership at St. James lasted over 64 years. Willie worked for the Veterans Administration for 28 years. He was employed at the Allen Park, Michigan, VA Hospital where he served as a Storekeeper in the Supply Division. After his retirement, he turned his energies to community service and for many years he volunteered with Inkster Senior Services transporting senior citizens to various places such as doctor appointments, grocery shopping and fun outings. An ardent and dedicated member of St. James, he served as a Trustee, member of the Men's Chorus and the Sanctuary Choir, Lay Leader to Annual Conference, Sunday Liturgist, Lay Leader of Caring and Membership Care Chairperson. He leaves to mourn his passing his sister, Gaynell Bess, nieces and nephews Pamela (Gregory) Johnson, Debbie West, Larry Hanson Smith, Steven Mention, Michael and Sharon Mention, Leslie Mention, Sr. and Suzanne Pete. He also leaves to mourn him, Del Starnes, Ruth Hodges and O.B. Catherine Thomas, loving friends and caregivers.

Mr. Willie Hanson was born in Sharon, Georgia on September 8,1919 to the union of Cap Hanson and Lola Hughes Hanson. He grew up on his parent's 60 acre farm where the raised cotton, corn, sweet potatoes and peanuts. His parents, brothers Jessie... View Obituary & Service Information

The family of Willie Hanson created this Life Tributes page to make it easy to share your memories.

Send flowers to the Hanson family.