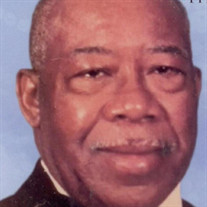 Willie Flaggs Jr., was born on December 24, 1930, in Leland, Mississippi. Willie, affectionately known as Jacob, was the second of five children born to Willie and Lucy Bell Flaggs. He made his PEACEFUL transition to rest with the Lord and Savior Jesus Christ, at his home on March 13, 2021 at 3:25pm. He was preceded in death by his sisters Mary Ella, Gertrude (Sugarbabe) and Annie Belle, daughter Mildred Adams, and grandson Eugene Thompson IV. As a youth, Jacob was quite the roughhouse, who loved to wrestle and hang out with the older guys. As the first son, he was the definition of a protective "big brother." He enjoyed riding his horse (Light Foot) as that was the preferred mode of transportation around the family homestead. He had a passion for hunting and fishing, which he willingly taught his younger brother, John. As a young man, he was a Sargent in the United States Army, fighting in the Korean War at the Battle of Pork Chop Hill. After being honorably discharged, he relocated to Detroit, MI where he met the love of his life, Mildred Lee Jenkins. At the time of transition, they had been married 62 years. Jacob was employed at Ford Motor Company as a Welder and Line Steward, and took an early retirement after 28 years of service. Like most Mississippi men of his era, he was already dedicated to his job, with an outstanding work history; missing work was not an option. Jacob loved his wife and family; they were an amazing team. He especially loved her cooking, her signature birthday coconut cake being his favorites. He, along with Mildred, had the gift of giving and hospitality. They entire Flaggs' family gatherings (and later Jenkins) were often held at their home. He was indeed the patriarch of the family. You could always count on him for providing honest and candid feedback, letting you know his thoughts, which often made you laugh (or gasp..). He was a "father" to many, raisin Eugene and Mill as toddlers as well as Cheryl Ann. He was also Goddaddy to Sabrina, whose father died in 1998; it was then he told her she was to call him dad now. He was instrumental in the lives of many children. While many wait for their retirement to enjoy life, Jacob lived his to the fullest. He was a "master" checker player, a fisherman and hunter, and an avid bid whist and pinochle player. He was quite the athlete too, excelling at both softball and baseball (including being a coach and umpire). He was famous for his barbecuing (a talent he taught his brother and handed down to Eugene). He also cared about the community, being a Clubhouse Manager/Treasurer; they often made donations to First Baptist Church of Ecorse and man families in need. He loved traveling annually to Mississippi. Cruising was also a favorite pastime of his and Mildred, traveling with John, Shirley, Charles, Bert, Bill, Mary, Griffin, Katie, Ernest, and Alice. Until the very end, Mildred doted on him, always by his side; he did not even want to go to bed at night without her laying next to him. Mary, who was more like a "sister: than a sister-in-law, took excellent care of him ensuring he was as comfortable as possible; he fondly referred to her as "his doctor". Eugene, the chef, would prepare all kinds of exotic meals and Margie (his second Godchild) was always there for him with words of comfort or making sure he got to enjoy her awesome cooking, whatever he had a taste for, he always got it. He relied heavily on medical advice from his nephew, Lad Jenkins (he always wanted to know what he thought) and spiritual support from his niece, Tonya. He had a lengthy illness but fought a courageous battle. Cherishing his memories are his loving wife, Mildred; devoted children, Eugene Thompson III (Andrea) and Sabrina Griffin, his goddaughter; loyal brother, John Flaggs (Shirley); sisyer0in-law,Mary Randolph; brother -in-law, Edmond Jenkins; 12 grandchildren; a host of nieces and nephews; six godchildren and special longtime close friend Willie Kendall.

Willie Flaggs Jr., was born on December 24, 1930, in Leland, Mississippi. Willie, affectionately known as Jacob, was the second of five children born to Willie and Lucy Bell Flaggs. He made his PEACEFUL transition to rest with the Lord and... View Obituary & Service Information

The family of Willie Flagg created this Life Tributes page to make it easy to share your memories.

Send flowers to the Flagg family.