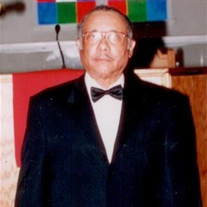 Willie Walker Bonner was born on March 25, 1925 in Coweta County , Newman, Georgia to Ira Walker and Artie Mae Stegall Bonner. He was the 2nd oldest of 11 children. His parents, 3 brothers... Herbert, Johnnie, and Willie Pierce: 5 sisters: Wilma, Peraline, Sara Evelyn, Mae Fannie, Margaret: and a special friend Fannie McGruder preceded him in death. Deacon Bonner met the love in his life while living in Newman, GA. Their families were acquainted and grew up with one another which strengthened their bond. When his love moved here to Michigan, Willie followed. He took the advice of his Uncle who told him "you better get that gal" and was United in Holy Matrimony to Bettie Mae Billingslea on January 19, 1952 in Detroit, MI. During 49 years of marriage they were blessed with 4 children in which their example instilled family values through their faithfulness to each other and to God. It was important to them to take yearly down home trips to Newman, GA to participate in family gatherings, strengthen family bonds and to get an idea of what it was like the way they grew up in lifestyle. It was very important to him for us to know our family on both sides. Deacon Bonner accepted Christ at an early age and was baptized and united with Wesley Chapel Church in Newman, GA. After serving in the US Navy during WWII he relocated to Inkster, MI for better work opportunities. He worked 2 full-time jobs at Oakwood Hospital in the Laundry Department as a driver, and he was the first African American to be hired at Wayne County General Hospital in Motorpool as a heavy equipment operator while raising 4 children. For community service, he served as a Commissioner on Aging for the City of Inkster. Upon retirement from his employers he joined Springhill Missionary Baptist Church in March of 1983, where his wife was a long standing member. He served faithfully there as a devoted Sunday school student, bus driver, opening the doors of the church when needed, served in the mass and men's choir as well as deacon until his health declined. The joy and pleasures of his life was being surrounded around family and close friends. He enjoyed playing cards, fishing, shooting the breeze, going to the movies, and last but not least he loved gardening. He would sow, plant, weed and harvest his homemade goods from the earth. Mama would help harvest that which was planted while preserving can food for the winter. We as a family were never without our needs being met throughout the years while daddy was our provider and mama as his helpmate. On Thursday, October 31, 2019, at Maple Manor, Wayne, MI, GOD, in His infinite wisdom, decided to call our beloved dad, grandfather, great-grandfather, brother, uncle, cousin, friend and neighbor home to be with Him. Being a Christian man , he was prepared to answer His call and allow His will to be done. Willie was a faithful, loyal and devoted person and put his heart into whatever he committed himself to do. He leaves to cherish his precious memories: 4 children: Rodney, Kenneth, Ramona and Jeffrey Craig; 1 sister, Emma Lee (Jimmie) Dixon, Atlanta, GA; 2 brothers, Sanford (Gussie) Bonner, Fairburn, GA and Fred (Carrie) Bonner, Atlanta, GA; 3 sisters-in-law, Phyllis Bonner of Inkster, MI, Elizabeth Collier of Cleveland, OH, and Willia Miller of Farmington Hills, MI, 5 grandchildren: Temekia, Tonya, Jeffrey Damaaz, Darrell Walker and Dominque; 5 great-grandchildren: Kiera, Diamond, David, Destiny, and Jayden; and 1 great-great-grandson, Aiden; and numerous of nieces, nephews, cousins, friends and his Springhill Missionary Baptist Church members. He will be greatly missed.

The family of Willie Bonner created this Life Tributes page to make it easy to share your memories.

Send flowers to the Bonner family.