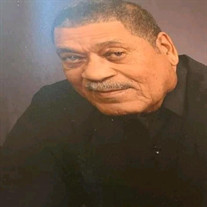 William Earl Robinson departed this life on September 14, 2019 in Beaumont Hospital located in Dearborn, Michigan after a courageous battle with cancer that metastasized from his lungs throughout his body. He was born on January 27, 1937 in Gary, West Virginia to the late James Arthur and Annie Loraine Robinson. William, affectionately known as "Earl", "Earl the Pearl" or "Cool Earl" loved his family, he would always talk about the wonderful things they did and were doing. He was also a loyal friend and established many great relationships throughout his life. Earl attended Gary District High School in Gary, West Virginia and participated in the marching band and played the trombone. Also during his youth, he was a member of the usher board, junior choir and church school. Earl eventually moved to Detroit, Michigan where he met the love of his life and future wife Alice Hamby. Through their union his daughter Carol Ann Robinson was born whom he and Alice loved dearly. She was his confidant and go to person to the very end. Earl was also blessed with another daughter, Telane Hadden. Earl was an extremely hard working man for over 60 years. He was employed by General Motors from 1966 to 1981, and then eventually hired by the City of Inkster until his retirement on June 30, 2011. He was also known as the "cement man", doing concrete work throughout the area. Earl loved to drive the city and other area to view his meticulous work. Earl was preceded in death by his beloved wife, Alice Robinson, his parents James and Annie Loraine Robinson and his brother Thomas O. Robinson. He leaves to cherish his memories his daughters Carol Price (Terrance) of Trenton, MI and Telane Hadden of Romulus, MI, three brothers: James Arthur Robinson Jr. (Doris) of Bluefield, WV, Leroy Robinson of South Charleston, WV, Rev. Konnie G. Robinson of Winston-Salem, NC, Three sisters, Loraine Walker (James) of Gaithersburg, MD, Dora Bryson of Fort Washington, MD, Evangelist Margaret Robinson of South Charleston, WV. Grandchildren, J Wesley (Buddy), Terrance Namone Jr. (Tubby), Remone, Christian, Aveon. Great Grandchildren, Victoria Octavia Rae, Mecca Starr Carol, Kyla, Saniya, Imani, Ve'onna, Selena, Gabriella, Khloe, Steven, special lady friend Laura Maine and a host of other relatives and friends.

William Earl Robinson departed this life on September 14, 2019 in Beaumont Hospital located in Dearborn, Michigan after a courageous battle with cancer that metastasized from his lungs throughout his body. He was born on January 27, 1937 in... View Obituary & Service Information

The family of William Robinson created this Life Tributes page to make it easy to share your memories.

Send flowers to the Robinson family.