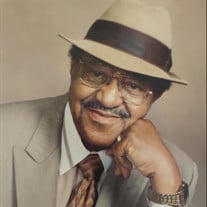 William Jefferson Price Sr., a family man, military veteran and entrepreneur of strong faith and unshakable pride who loved cooking and conversation, died March 31. He was 86. Born July 23, 1935 in Darlove, Mississippi to James Price and Rosa Coats, William was known as WJ to family and friends. He grew up in a large family, the 14th of 16 children. Two of his siblings, Luvader and James Jr., are still living. William moved to Michigan when he was 19. After graduating high school, he joined the military and received an honorable discharge from the Army. He then worked in construction for several years. He felt strongly about African American business ownership, which led him to own a convenience store in Romulus, Michigan. Later, he became a broker and opened his own real estate office, William J. Price Realty, later named Friendship Realty. In the early 1970’s he began working for Ford Motor Company until his retirement in 2004. He was highly respected throughout his community and workplace for his leadership skills and work ethic. William believed in higher education and was proud of the many degrees his children and grandchildren attained. Because he knew the value of education, he faithfully supported the United Negro College Fund, which helped many young people attend college. William married Rena Marion Campbell (deceased) and they had two sons, William Jr. and Jeffrey Sr. He was a single dad and was proud to tell people that his sons were football players in college. Later, William found the love of his life, Jean Ramey. After 10 years of courtship, they married. They were married for 17 years. Their blended family added two daughters, Brendel and Rachael, and son Bryan, who affectionally called him Dad. A man of faith, he became an ordained deacon in his early 20s. William and Jean joined Gethsemane Missionary Baptist Church in 2010 it was there that he continued to serve as deacon emeritus. He loved his church family and was proud to often share the gospel. Among his favorite quotes from scripture was “Be not deceived; God is not mocked: for whatsoever a man soweth, that shall he also reap.” Galatians 6:7. William took pride in dressing well and was never seen in a pair of jeans, shorts or gym shoes. He loved to debate politics and express his opinions on anything he didn’t agree with. Family was important to him and he took extra measures to stay connected by arranging road trips to Mississippi and other states, visiting loved ones and regularly making long-distance phone calls to relatives. WJ absolutely loved having family gatherings, especially during Thanksgiving and Easter. He was known for his famous homemade ice cream, lamb chops, dressing and yams and making sure everyone was full and happy. He glowed with pride when told how tasty his food was, and if he didn’t hear feedback, he’d ask multiple times what his guests thought of his cooking. Every year, he would buy bushels of corn from a local farmer’s market and call everybody to pick up their bag. However, most would still have corn left from the previous year. Family members laughed or groaned when he called saying, “Ya’ll come get this corn!” William loved to talk. He enjoyed going through his phone book and calling people at all hours of the day, even if he knew they were at work. Those lucky enough might hear from him more than once in a day. His grandchildren were shocked when he shared that he used to pick cotton as a child down South. He proved he wasn’t as old as they thought when he joined them in a relay race or displayed his strength by lifting heavy items. William leaves to cherish his memory his loving and devoted wife Jean; sons William (Karla), Jeffrey (Karon), Bryan (Ann); daughters Brendel and Rachael; grandchildren Nikiesha (Kareem), Andre, Steven, Kirk, William III (Ashley), Shakiyla, Kamila, Kariyma, Kaila Price, Kayla Patterson, Ajsha, Jeffrey Jr., Jiyahna and Madison; 9 great grandchildren; siblings Luvader Davies and James Price Jr.; nieces, nephews, church family and extended family and friends.

The family of William Price Sr. created this Life Tributes page to make it easy to share your memories.

Send flowers to the Price family.