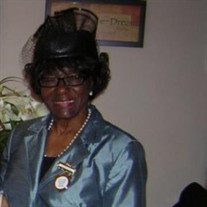 Willella Johnson was born on February 17,1935, in Belzoni, Mississippi to the union of Mr. William and Lucille Scott who both preceded her in death. Willella affectionately named after her father loved the Lord and FAMILY in that order. she met and married Tommie Lee Griffin and from this union begot two beautiful daughter, Ella Mae Jones who preceded her in death and Betty Davis. Soon after the birth of Ella Mae they moved to Detroit, MI to pursue a better more comfortable life. With only a ninth grade education, Willella was master of many crafts. Her and Tommie Lee soon decided to separate. Being the strong woman that she was she took the knowledge she had to obtain a good life for her family. Willella was a great cook so she served as a cook at the local restaurant, she worked at a hair salon doing hair and even was apart of the liquor prohibition. We want to say what part. She later married again to Harvey Johnson who preceded her in death. Working a job a Chrysler Plant provided her with a comfortable life for her and her children. While raising two children alone she invited her siblings to join her up north which a few took part. She believed in family being together the more the merrier. No family member or friend was ever homeless due to Willella. When her children married and moved away to Chicago she continued working at Chrysler. Later Willella had two of the Granddaughter's love with her. With two small children in the home again she made sure she found a church home so she joined Tridestone Baptist Church. She wanted to make sure she continued to teach and bring them up with the knowledge and spirit of God. Later when she left Chrysler she moved away and found another church home at Little Rock Baptist Church where she remained. Summers were for her Grandchildren. Not just one or two but all her Grand Children every summer. She loved a house full of children. Summers were filled with food, games and memories. Her main thing was you need to know your family. Any child that wanted to come for the summer was welcomed be it grandchild, nieces or nephews or lil cousins. She was famous making homemade rolls, sweet potato pie, fired chicken and fried corn. She did not leave the children out she taught us all how to chop, cook and prep meals. She believe in passing on the knowledge. When she took ill with dementia in 2005 her daughters moved her to Chicago. Later in 2007 she returned to Detroit, MI were she remained with the Grand daughters she raised until her illness progressed and she moved to Imperial Nursing Center in 2010. Dementia did not stop her from being active. She continued to go to dinners, on road trips and even bowled. She enjoyed her 85th birthday this year with family and friends. She departed this life Saturday morning, April 20,2020 at Imperial Nursing Center. She leaves to mourn her daughter, Betty (Joe-preceded her in death) Davis; sisters Pearl Neely McBee, Carrie Starks, Azzie Berrie Scott (preceded her in death) Cinderella Scott, Virginia (Morris) Lee, Jessie Mae Scott, Venora Scott, 2 brothers, Adrian Scott, wh preceded her in death and Willett Scott; Eight Grand Children Satonyia Griffin, Taiya (Marlin) Montgomery both of Michigan, Elliot (Stacey) Jones of South Carolina, JoeAnna Davis, Darius (Alondra) DAvis, Levi Davis (who preceded her in death), Samuel (Linda) Jones, Fredrick (Rhonda) Jones, Sheila Jones all of Illinois, 21 great grand children Willea Griffin, Preia Montgomery, Akayla Harris, Thomas Stephens, Sammera Jones, Octavia Jones, Jarmiah Scott, Fredrick Thomas, Africa Bass (who preceded her in death), Raykeem Bass, Reginald Bass, Keonna Bass, Jealisa Bass, Keith Jones and Javonna Jones, a special nephew Marvin (Kathy) Scott along with a host of nephews nieces cousins church family, friends Imperial Nursing Home family.

Willella Johnson was born on February 17,1935, in Belzoni, Mississippi to the union of Mr. William and Lucille Scott who both preceded her in death. Willella affectionately named after her father loved the Lord and FAMILY in that order. she... View Obituary & Service Information

The family of Willella Johnson created this Life Tributes page to make it easy to share your memories.

Willella Johnson was born on February 17,1935, in Belzoni, Mississippi...