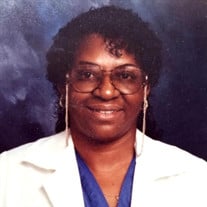 Vivian P. Whittaker was born on July 30, 1941 to Eddie Lee McSwain and Florrie B. Sawyer, in Jefferson County Birmingham, Alabama. She received her education through the Inkster Public School System, continuing her education in the medical field as being a Phlebotomist for Oakwood Hospital for thirty-seven years. Vivian had a strong work ethic. She worked long and hard believing in striving to do better and be better. Her co-workers saw Vivian as a fighter and convinced her to run for the steward position with AFSCME Union. She won successfully and maintained that position for many years where she fought for better wages and more secure working conditions at the hospital. Vivian received many certificates and mementos for outstanding service to the union. She was well known in her community as the quiet lady in the corner. She was loved by many and she loved many. She enjoyed traveling and attending family reunions, playing golf, cards, Monopoly, and Pokeno. Vivian may not have visited you often or picked up the phone to call you, but one thing for sure, she would always send you out a birthday or a Christmas card. She was preceded in death by her parents, two siblings, son-in-law and baby daughter Cynthia. She received her wings on Sunday, February 23, 2020. Vivian leaves to cherish her memories, her daughter, Florrie McClain of Stockbridge, Georgia; son, Robert Claypool Jr. (Jennifer) of Denver, Colorado; aunt, Eddie Mar Mainor (Aunt Tutt) of Detroit, Michigan; five grandchildren, four great-grandchildren and a host of nieces, nephews, cousins, and many friends. The family would like to extend a Special Thank you to Farmington Hills Inn's, Edward Sabbag and Tanica Knight, (caregivers).

Vivian P. Whittaker was born on July 30, 1941 to Eddie Lee McSwain and Florrie B. Sawyer, in Jefferson County Birmingham, Alabama. She received her education through the Inkster Public School System, continuing her education in the medical... View Obituary & Service Information

The family of Vivian Whittaker created this Life Tributes page to make it easy to share your memories.

Send flowers to the Whittaker family.