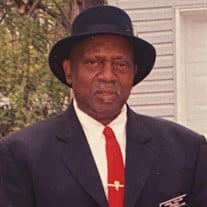 On February 17, 1940 in Homerville, GA, Virgil Taylor Jr. was born to Ms. Aileen Barksdale. Ad a young man Virgil enjoyed working on the farm (112 acres) Virgil proudly claimed that. He worked the whole acres behind a mule and a plow. At 9 years of age Virgil not only knew how to drive a farming tractor he also knew how to change oil and filter. Virgil later met the love of his life, Ms. Ruby Mae Williams of Houston County, GA. In 1959, Virgil married Ruby and they had their firs child, Wallace Taylor. By 1965, Virgil and Ruby would add four more children Annette, Johnny, Lewis, and Angela. Also in 1965 Virgil and his expanding family left Atlanta, Georgia on a train to Detroit,. Virgil loved telling that story to his children. In 1966 yet another child, Carolyn was added to this expanding union. After working odd jobs here and there Virgil began working for General Motors in 1970, where he worked for 38 years. Also in 1970, Virgil and Ruby joined Womack Temple Church under the leadership of Rev. Pullwood. Then in 1972, the last of their children, Charles, was born. How Blessed! Virgil loved all of his children dearly, including his son Virrell Dequan Taylor Pruitt. Virgil and Ruby were so happy in life with each other that Virgil couldn't live without his wife. So a broken hear led to his peaceful transition to the next life around 3:14am on January 25,2021, just a few days behind is wife. They leave behind seven children, trusting they did they best they could as parents for their children to lead the same loving and productive lives that they raised them to have. The Taylors leaves to cherish their memory, their beautiful children: Wallace Taylor, Annette Taylor, Johnny Taylor, Lewis Taylor, Angela Taylor, Carolyn (Michael) Wilson and Charles Taylor, Virrell Dequan Taylor Pruitt, grandchildren; Torontez, Taniesha, Alicia, Shawnta, Ambrose, Dominque, Renee, Brandon and Devon, great-grandchildren: Broderick, Sharlynn, Londyn, Kamren, Amya, Liyah, Anthony, Aubrey, and Jaxson; Ruby's siblings: Wilma, Sarah, Corine, Gloria, Louise, Grant Jr., Edwards, Willie James, Elizabeth, Geraldine, and Inez. God-Children: Michelle, Nerissa, Dewayne, and Wayde, and a host of nieces, nephews, family and friends.

On February 17, 1940 in Homerville, GA, Virgil Taylor Jr. was born to Ms. Aileen Barksdale. Ad a young man Virgil enjoyed working on the farm (112 acres) Virgil proudly claimed that. He worked the whole acres behind a mule and a plow. At 9 years... View Obituary & Service Information

The family of Virgil Taylor Jr. created this Life Tributes page to make it easy to share your memories.

Send flowers to the Taylor family.