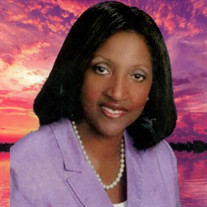 Valerie Denise Robinson was born October 18, 1953 in Inkster, MI; first born to Marylene and Charles Robinson. Growning up, Valerie was a girl with everything. She was taught to live her dreams and follow her passion. She grew up in a neighborhood that was like one big family. The neighborhood kids did everything together, from softball to roller skating, and Valerie's backyard was always full of the neighborhood children. her mother kept her involved in community activities to instill the value of giving. She graduated from Inkster High School were she crowned homecoming queen and was involved in many student organizations including the marching band where she was a fire baton majorette. After graduation Valerie attended Ohio State University where she obtained a Bachelor of Arts in Psychology. During her time there she pledged Delta Sigma Theta and served as a resident assistant. Once graduating she moved across the country to California to begin her new life. While in California, Valerie worked as a locomotive engineer for Southern Pacific where she was the first Black woman to be hired in her region. Also working at Southern Pacific was her future husband Clarence Rice. A few years after meeting they were married in a private service in Maui. Together they started two businesses: a barbeque restaurant and a plant shop. Valerie's love of plants would continue throughout her life. In 1983 they welcomed their first born Jacelyn, who was almost born on the Oakland Bridge due to morning traffic. A few years later they moved to Florida where Valerie began her career in education as a teacher. In Florida Valerie gave birth to the couple's son Marcus in 1988. Family time was always a priority and the beaches of Key West were the perfect backdrop. After eight years in Florida, Valerie moved the family to the Atlanta, Georgia area to be closer to family and for a change of scenery. While in Georgia Valerie taught for several years at Shiloh Elementary School where she served as the gifted teacher and developed innovative materials to challenge the students. Her children attended the neighboring schools and fondly remember the 30 minute car rides each morning that were filled with gospel music and Kirk Franklin's The Nu Nation Project on repeat. Saturday's were often spent between her sister's shop and family fishing trips to Lake Lanier. In 1999 Valerie moved with her family to Las Vegas to be closer to her father. While there she continued her education by obtaining a master's degree in Education Leadership while working full-time. With the degree in hand she became the principal at Frias Elementary School and served there for 8 years. Nevada's natural landscape inspired Valerie's first book "An Artist View of Nevada" which was published in 2015. Also during her time in Las Vegas she became active with the local chapter of Delta Sigma Theta, tutored students at home that were too sick to attend school, and served on the board of A Second Chance for Wings Inc. All while remaining active at her church home the Great Commission Interdenominational Church. After 30 years in education Valerie retired to focus on her new passion for writing while taking the time to travel. She relocated to Stuart, Florida and spent roughly six months out of year at her second home in Negril, Jamaica. Friends and family were often showered with beautiful pictures and poems inspired by the beauty she found in her daily walks. Traveling and writing occupied most of her time, but she still found time to continue her passion of teaching students by substitute teaching with Martin County School District. She often said that being around students kept her young. Although she was retired she continued her zeal for helping others through multiple projects, including book donations to Jamaica where she noticed a need. Valerie is preceded in death by her mother, Marylene Robinson. Valerie was granted her angel wings on October 19,2020, one day after her 67th birthday. Her final weeks were spent surrounded by her children whom she had devoted her life to caring for and her new granddaughter. Her life would seem too short to many, but those who were touched by her understood that the quality of existence far exceeds the quantity of time in which one lives. Valerie was not only alive but she fully lived carrying out her prayer and mantra "Bless me oh Lord to be a blessing to others, use me as a vessel in Jesus mighty name, I give God all the glory." These words could be found hanging in Valerie's bedroom wall and those that know her know that those words were indeed fulfilled. She brought light everywhere she went and left each person better than how she found them. For that she will be sorely missed but celebrated for the work that she did while here. Valerie is survived by her father and bonus - mother, Charles and Loyce Robinson; sisters Carolyn Robinson and Cheryl Whicker (David Whicker); half brothers Cortney Robinson and Dante Sellers; son, Marcus Rice; daughter and son-in-law Jacelyn and Philip Boayue; and granddaughter Nhandi Boayue.

Valerie Denise Robinson was born October 18, 1953 in Inkster, MI; first born to Marylene and Charles Robinson. Growning up, Valerie was a girl with everything. She was taught to live her dreams and follow her passion. She grew up in a neighborhood... View Obituary & Service Information

The family of Valerie Rice created this Life Tributes page to make it easy to share your memories.

Send flowers to the Rice family.