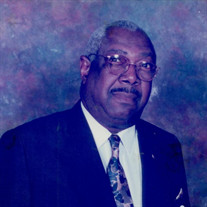 Ulysses was born on June 13, 1933 to the late Add and Rosa Austin of Alberta Alabama. He was the 11th son, aka "knee baby". There were 12 boys and 2 girls. They all preceeded him in death. Ulysses was baptized at the age of 12 at Oak Grove Baptist Church in Alberta Alabama. At the age of 15 he went out on his own and moved to Selma Alabama where he joined Providence Baptist Church. In 1952 he married Willie Mae Gordon and to this union there were 9 children: Veronica Dixon (Dave), Ulysses Austin Jr., Rosa Austin, Kimberly Obiora (Rey), Christopher Austin, Timothy Austin (Martina), and Aaron, Maurice and Laura Collins which preceeded him in death. in 1954 he joined New Bethel church in Detroit under the leadership of Rev. C.L Franklin. In 1973 he joined Tabernacle Missionary Baptist Church under the leadership of Dr. Frederick G. Sampson. On April 18, 1976, the family was blessed with another girl Shakira Scott. In 1989 he married Sharon Robinson and to this union blended children Cherie Robinson Austin, James Robinson and Mark Robinson (Joy). Ulysses was a longtime employee at General Motors Willow Run plant in the paint department from which he retired after 39 years. He was know to his coworkers and friends as "Doc". Ulysses has been a faithful usher for more than 35 year at Tabernacle, volunteered for their Meals on Wheels program for over 20 years, was a member of the Marr-O-Not Fellowship group, Group #7 (Up &Doing) member, attended Tabernacles New Hope Sunday school class, and was a volunteer member of the Detroit Mid-City Lions Club for over 42 years. He has received numerous awards over the years. On May 21, 2017, he was honored along with other men for his faithful service to the church and community. Known to many simply as "Austin", some have said "If you didn't see him you could hear him". Ulysses enjoyed cooking for family, friends and events (Lions fish fry). He loved to travel and has been to many foreign countries. He is survived by his devoted wife Sharon, 10 Children, 25 grand kids, numerous great grand kids, nieces, nephews, inlaws, cousins and friends.

Ulysses was born on June 13, 1933 to the late Add and Rosa Austin of Alberta Alabama. He was the 11th son, aka "knee baby". There were 12 boys and 2 girls. They all preceeded him in death. Ulysses was baptized at the age of 12 at Oak Grove... View Obituary & Service Information

The family of Ulysses S. Austin created this Life Tributes page to make it easy to share your memories.

Send flowers to the Austin family.