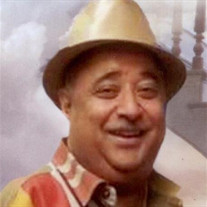 Timothy Benton "Tim" was born on April 18, 1960 in Detroit, Michigan to Ophelia Draggs. He went to Robichaud High School in the Westwood School District of Dearborn Heights, Michigan where he met the love of his life Cheryl Wright. Tim and Cheryl began a loving relationship in 1978, in their union they had two daughters, and were married in front of God on August 17, 1985. Tim and Cheryl had a relationship like no other and they spent over 40 years committed to each other, they were inseparable! In their marriage they knew how to communicate, they had respect for each other, they loved each other unconditionally, and they held each other down for better or worse, in sickness and health, until death they parted. Tim was the umbrella for Cheryl in the rain, while Cheryl was the sunshine to his cloudy day. Their love and marriage was like a New York Times best selling novel. Tim was an outgoing, hardworking, man of God who loved the Lord and he loved helping anyone he could. If you needed anything and he knew it, he would not rest until he made sure he helped you get what you needed. He never missed important events of his family or his friends. He spent his early years working at Detroit Metro Airport in the Bakery before moving on to work at General Motors in the Cadillac Building until they had a big layoff. He then went to work at Ford Motor Company, Vulcan Forge until he was medically retired. In his spare time, he coached basketball for his work team and youth teams, he would often volunteer at the schools concession stands. Tim played baseball and softball, he was on a bowling league at Wayne Bowling Alley, he also played bingo, and was a great bid whist player. He loved to eat all kinds of food and he could give you the best recommendation of where to eat. He spent his last days crunching on Kroger Peppermints and ice chips. Anyone who came to visit him in his last days, knew to go to Kroger down aisle 14B to get the big bag of peppermints from the top shelf. He wouldn't eat any other kind! He was a part of the Shake A Real Man's Hand Social Club and he was also a Mason. Tim gave his life to Christ at an early age and was a servant at Romulus Community Baptist Church for over 30 years, where he was ordained as a Minister. He sang in the Men's Choir and he was the Chairman of the Trustee Board. If you knew Tim, then you would know that he loved his family! He made sure his family had a relationship with Christ. There was nothing he wouldn't do for his family. He loved attending anything that was important to his wife, children, grandchildren. He would talk for hours to anyone who would listen, talking about his family. He had a special relationship with all of his grandchildren and they called him, "PaPa". He had an unique relationship with both of his sons-in-law. He leaves to cherish his memory: his loving wife; Cheryl; his children, RaKeya Hill (Rastus Hill), Julian Seay, and Ornella Malloy (Jason Malloy); his grandchildren; Jaymar Benton, Nyla Seay, Nia Hill, Arianna Malloy, Aliya Hill, Julian Seay Jr., and Jada Malloy; his mother, Ophelia Draggs; his siblings, Donald Samuel, Phyllis Benton (preceded him in death), Ronnie Samuel (Pam Samuel), Willie Draggs Jr., Sophia Draggs, his mother-in-law, Geraldine Wright (Willie Wright Sr. preceded him in death); sisters-in-law, Deborah Watts (Willie Watts), Cynthia Russell (Kenny Russell); brothers-in-law, Willie Wright Jr., and Tyrone Wright (Michelle Wright); many uncles, aunts, nieces, nephews, cousins, and so many friends.

Timothy Benton "Tim" was born on April 18, 1960 in Detroit, Michigan to Ophelia Draggs. He went to Robichaud High School in the Westwood School District of Dearborn Heights, Michigan where he met the love of his life Cheryl Wright. Tim and Cheryl... View Obituary & Service Information

The family of Timothy Benton created this Life Tributes page to make it easy to share your memories.

Send flowers to the Benton family.