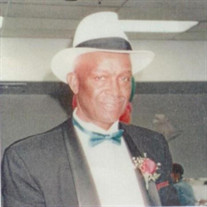 Thomas Willis Ray "TW" was born November 24, 1925 to the late Robert and Roberta Ray in Sardis, Mississippi on the Harrison Plantation. He was one of 10 children. He moved to Inkster, Michigan early in his life and united with Gwendolyn Hawkins. To this union 5 children were born-Roberta, Clifton, a set of twins that died shortly after their birth, and Afreida. The family relocated to Buffalo, N.Y. and Los Angels, California. Afreida lived in Michigan with her grandparents. Prior to this union a son, Thomas Ray Jr. was born in Mississippi. TW professed Christ early in life and attended church wherever he lived. Until his health began to fail he attended Romulus Community Baptist Church in Romulus, Michigan. His easy smile and natural blue-grey eyes helped make him a natural flirt and he thrived on making the ladies smile. He loved his family very much. He always checked on his sisters and nieces, always willing to bring them anything he thought they could use. Thomas was and avid outdoorsman-hunting and fishing were his favorite pastimes. He especially enjoyed fishing for the Family Reunion. During his final years, his niece Wavie resurrected his love for the outdoors and he wanted to sit in the sunshine whenever possible. Thomas was a resident of Regency at Canton during his final years. Proceeding him in death were his parents Robert and Roberta Ray, life partner Gwendolyn Ray, the twins, brother Booker T., sisters Wavie, twins Katie and Jannie, Ernestine and Josephine, Bennie Belle and Della He leaves to morn his passing, children Roberta Ray, Clifton Ray, and Afredia (Anderson) Wade, grandchildren Gwendolyn Ray, Sylvia Wade, and Alexis Wade, great-grandson Robert Ray, sister Bernice Gray and a host of nieces, nephews, and cousins that he loved very much.

Thomas Willis Ray "TW" was born November 24, 1925 to the late Robert and Roberta Ray in Sardis, Mississippi on the Harrison Plantation. He was one of 10 children. He moved to Inkster, Michigan early in his life and united with Gwendolyn Hawkins.... View Obituary & Service Information

The family of Thomas Ray created this Life Tributes page to make it easy to share your memories.

Send flowers to the Ray family.