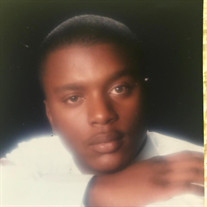 Thomas Bryant Lumpkin, the second son born unto the union of Thomas Lumpkin and Marsha Lumpkin March 4th, 1971 was educated in the Taylor public school systems until the 11th grade excelling in athletics, auto mechanics and wood shop. Thomas graduated from Inkster High School, class of 1989. "Mr. B" as his parents fondly called him was a delight to all he encountered. He had a giving heart, an open hand and was always willing to help someone in need. His happiest moments in life were the moments he spent with family. He adored his children. Bryant (better known as Maxwell) was an honorary member of the Inkster Cobras MC. At one point he held the office as vice president and then office as president. He was preceded in death by his father Thomas Lumpkin and his brother Trevin Donnell Lumpkin. Thomas leaves to mourn his mother, Marsha Lumpkin, four sons, Antonio, Johnathan, Cequan and Carlos (Carlito); Two daughters Chanel Lanae (Cornelius) and Ciara; seven grands, Jordan, Jahlil, DeJon, Rhylee, Mia, Cali and Chole Rose; one brother, Marvin Foster (Quan), Auntie Barbara Haywood, Auntie Physllis Martin (Delano), Auntie Carolyn Cegars (Leon), nieces and nephews, a host of cousins, friends, and of course , all of his motorcycle riders, the Inkster Cobras.

The family of Thomas B Lumpkin created this Life Tributes page to make it easy to share your memories.

Thomas Bryant Lumpkin, the second son born unto the union of...

Send flowers to the Lumpkin family.