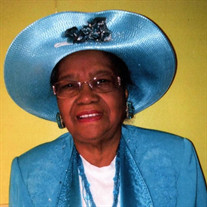 ~The Life Journey of Theola McKay Jones~ The life journey of Theola Jones began on February 2, 1929 at 10:30 a.m., when she was born in the home of her paternal grandmother Sophie Jackson in Hot Springs, Arkansas. Her birth parents, Velma Vandalia... View Obituary & Service Information

The family of Theola Jones created this Life Tributes page to make it easy to share your memories.

~The Life Journey of Theola McKay Jones~
The life journey of...