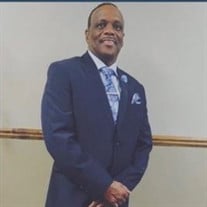 Terry Boyd was born September 2, 1958 in Detroit, Michigan to the late Jeremiah Boyd and Bessie Lee Boyd. He received his general education through the Detroit Public School System. He dedicated 35 years of his life to the workforce including Taystee Bread Company, General Motors, Hostess, Gardener White and most recently THA Trucking Company. Growing up, Terry enjoyed dancing, singing, and playing sports. He was truly an entertainer and was known as the "Michael Jackson" of May Street. He was an avid Detroit Lions and Detroit Tigers fan. You would for sure see him in gear representing Detroit sports. Terry was a classic man, who loved to talk your ear off and have a good meal. Above all, he was very encouraging and there's nothing he wouldn't do to help you. Terry' s greatest accomplishment is when accepted Jesus Christ as his Savior. He became a dedicated member of The International Church of Metro Detroit in 2012. He was s dedicated and trustworthy man of God. Terry was very active in the Men's Ministry, The Outreach Team, and the Bus Ministry. Terry was known as an encourager who showed passion for everyone. He took pride in developing the youth men's group. He was a loving member of the church and had a close bond with Pastor Art Wilson, Thomas & Shalilah. Terry was called home to be with the Lod on June 23, 2020. He was preceded in death by his parents, Jeremiah and Bessie Lee Boyd. He leaves to cherish his precious memories, his sons, Terry Mayfield (Marie) and Quintil Briggs, his daughter Danah Morrow, his granddaughters, Kaitlyn Sims, Dakota Morrow, his siblings. Linda Drake (Thomas), Dennis Boyd (Marquita), Denise Boyd, Rona Weaver (Courtney), a special lady in his life, Tracy Carter, one special aunt Lauretha Tolin and a host of nieces, nephews, relatives, and friends.

Terry Boyd was born September 2, 1958 in Detroit, Michigan to the late Jeremiah Boyd and Bessie Lee Boyd. He received his general education through the Detroit Public School System. He dedicated 35 years of his life to the workforce including... View Obituary & Service Information

The family of Terry Boyd created this Life Tributes page to make it easy to share your memories.

Send flowers to the Boyd family.