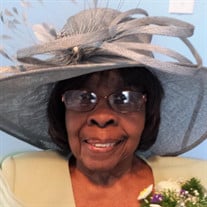 Mother Tecoria Slater was born in Sunflower County, Mississippi to the union of Walther and E.V. Robinson. She was the oldest of nine children and received her education for the Sunflower County school. Mother Slater met and Married Willie Slater in 1946, who preceded her in death. To this union eight children were born. Three sons, John Henry, Albert Bell, and Willie preceded her in death as well as her daughter Patricia. Before the death of Patricia she would often say that God took all of her men folk and left her with her girls adding. "They take good care of me." To provide a better life, the family moved to Inkster, Michigan in 1955. Mother Slater accepted the Lord in 1947 under the leadership of Pastor I. Slack. The family became members of the then Harrison Rd. COGIC under the leadership of Pastor W.C. Cook. Mother Slater remained an active member under Bishop Issac King Jr. and under the present leader, Pastor Kellen Brooks of Pentecostal Temple Church of God in Christ. Mother Slater was involved in many auxiliaries throughout the years but she especially loved Sunday school and was a faithful Sunday School teacher for over 50 years. She was well known for her loud and boisterous shout of "Amen to the sisters," after successfully winning the offering banner against the men's Sunday school class. Of course, it was always done in a friendly competition; keeping the men's class on the their toes. One of the mother's favorite scriptures was "Righteousness exalts a nation but sun is a reproach to any people" - Proverbs 14:34. Mother Slater had a warm and friendly spirit, always greeting those around her with a welcoming smile. She lived a Godly life ready to give words of encouragement and tell about the goodness of God. Mother Slater became a single parent at the young age of 35 leading her children by example. While raising 7 children, Mother volunteered her services at the City of Inkster, attending cosmetology school and found time to purse her passions: sewing and gardening. She leaves to celebrate her life and cherish her memories: children, Dorothy Slater, Ernestine Teel, Joyce (Ira) McLin and Annette Slater. Daughter-in-law: Debra Slater, Sister-in-law: Delores Robinson and Bonnie Bell Bernard from St. Louis, Missouri, Siblings: Roberta McClendon, David (Gloria) Robinson, Walter Robinson, Flora Crawford and Beulah (Herman) Whitehead, from Georgia: 17 grandchildren, 33 great grands, 19 great great grands, and a host of nieces, nephews and her church family. A special friend, Emma Wesley and special caregivers Gaye White and Felicia Mathews. Mother Slater was truly a virtuous woman and will be missed by all who knew and loved her!

Mother Tecoria Slater was born in Sunflower County, Mississippi to the union of Walther and E.V. Robinson. She was the oldest of nine children and received her education for the Sunflower County school. Mother Slater met and Married Willie... View Obituary & Service Information

The family of Tecoria Slater created this Life Tributes page to make it easy to share your memories.

Send flowers to the Slater family.