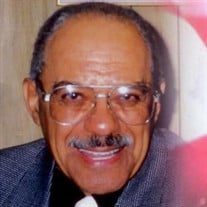 Sylvester David Lynem, was born on November 26, 1925 in Detroit, Michigan, the oldest child of Sylvester Lynem Sr. and Edith Jones Lynem. He lived in Detroit with his parents, sister Dorothy and brother Donald until the 1930's when they moved to his parent's place of birth, Cynthiana, Kentucky to farm. Sylvester often referred to as "David" or "Junior" attended Banneker Grade School in Cynthiana, where he played basketball, and with his parents, farmed and learned to hurt and fish. After completion of coursework at Banneker, he attended graduated from West Kentucky Vocational Training School in Paducah, Kentucky where he completed courses into auto mechanics. Sylvester returned to Detroit, Michigan in 1948 and in 1950, began working for Ford Motor Company as a heavy equipment operator, all while continuing his studies in auto mechanics. In July 1950 he married his sweetheart, Martha Williams, and took her to live with his family in Kentucky. In October 1950, Sylvester was drafted in the Army and served as Tank Driver, during the Korean War. On October 5, 1951, while serving in the war, he was injured being blown from a tank. He received the Purple Heart and Bronze Star for Valor and was honorably discharged in July 1952. Upon his discharge from the Army, Sylvester and Martha returned to Detroit Michigan where he resumed his position at Ford Motor Company (which they held for him while he was in the service.) Sylvester was an industrious man working two jobs at a time for most of his adult life. In addition to continually working at Ford Motor Company, he worked for Revere Cooper and Brass, Meijers, Sears & Roebuck, Tri City Medical and for a time as a custodian at his church. In October of 1957, the family moved to Westland, Michigan where they continued raising their family of three children, Sylvia, Sylvester III, and Daryl. Sylvester loved to travel, going on cruises, boating, hunting, fishing, camping at Sandy Pines and playing cards. He especially loved growing roses and peonies. He loved the outdoors and spent countless hours growing vegetables which he helped Martha can and freeze. He was fun loving, had a sense of humor, was sociable and loved his cars and trucks. Known as an "easy to look at" and a good looking man, he was fun to be around and had many friends and family who loved him dearly. All of his adult life, he was a dapper dresser and was very careful about his wardrobe and dress. Sylvester was baptized at St. James A.M.E. Church in Cynthiana, Kentucky and later joined Smith Chapel A.M.E. Church in Inkster, Michigan, where he served on the Trustee Board and Senior Usher Board. He was always close to his family and in 1979, while attending a cousin's funeral, they decided to begin a reunion of the now, 2,000 plus members which continues to this day. He served as president for several years and was recognized as an esteemed family elder for those members who turned 90 years of age. At the 200 reunion, Sylvester and Martha, along with other couple cousins who had been married twenty-five years or more, celebrated their fiftieth anniversary and repeated their wedding vows. In 2002, his son, Command Sgt. Major Daryl Lynem intervened with the U.S. Military and arranged for a special ninetieth birthday event in Florida, at which time 2-Star General, Charles Wilson, Master Sergeant Melvin Timmons, Sergeant, First Class Eric Bailey and Staff Sergeant Frederick Bishops, along with Command Sergeant Major Daryl Lynem, presented him with the delayed Korean Service Medal, National Defense United National, the Bronze Star and also honored him with a hand made Military Shadowbox. This celebration was attended by many of his friends and family from several stated. He would have been ninety-five on November 26,2020. Sylvester was preceded in death by his parents, Sylvester Lynem, Sr. and Edith Lynem; Sylvester Lynem, III; daughters-in-law, Robin Lynem; grandson, Jason Key; brothers, Donald Lynem and Leon Lynem (Judy); sisters, Rose Lynem Weatherspoon and Rita Lynem; brothers-in-law, Paul Benson and Bryant Weatherspoon and sister-in-law, Lola-Mae Lynem. Sylvester is survived by his wife of seventy years, Martha; daughter, Sylvia Dickerson (Charles), son, Daryl Lynem; grandchildren, Candis Lynem, Darryl Lynem, Jr. Brianna Lynem Butler and Shaina Lynem Washington; great grandchildren, Niles Lynem, Paige Key, Jayden Cotton, Jordon Butler, Robert Kirkland and Jason Kirkland; sister, Dorothy Lynem Benson; brother, Raymond Lynem (Patricia) and host of nieces, nephews, cousins and friends.

Sylvester David Lynem, was born on November 26, 1925 in Detroit, Michigan, the oldest child of Sylvester Lynem Sr. and Edith Jones Lynem. He lived in Detroit with his parents, sister Dorothy and brother Donald until the 1930's when they moved... View Obituary & Service Information

The family of Sylvester Lynem Jr. created this Life Tributes page to make it easy to share your memories.

Send flowers to the Lynem family.