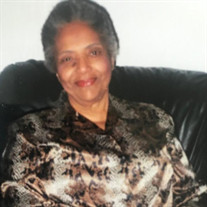 On November 18,1934, in Yspilanti, Michigan, Shirley Jean was born to the late Moses and Helen (Dickerson) Dennard. The last survivor of four siblings, she joins big sister Inez (Dawson), big brother Ray and little brother Gerald, in the Lord's loving embrace. Shirley was raised in Inkster and attended Inkster High School. After received medical training, she became a Laboratory Technician employed by Sinai Hospital in Detroit and retired from Botsford General Hospital in Farmington Hills after 25 years of service. She practiced the Methodist faith in her youth and believed in God throughout her entire life. Shirley enjoyed reading crime and suspense novels by favorite authour James Patterson and Stephen King, playing cards, electronic games and loved sweets of all kinds, especially ice cream. Crocheting and needlepoint were hobbies of hers that resulted in beautifully, intricately crafted clothing, afghans and others keepsake-caliber items. She like charm bracelets, hats, makeup and the colors black and beige. Shirley was a big fan of the TV show American Ninja Warrior, National geograhphic wildfire specials, UFC (mixed martial arts) fights and Beyounce'. She had many pets over the years, most recently her late, beloved feline companions Sidney and Peanut Butter, who truly adored her. Skylark by Aretha Franklin and You'll Never Find Another Love Like Mine by Lou Rawls, were two of her all-time favorite songs that she played over and over again. Shirley's dear nephew, Darryl Dennard and Allen Johnson, have departed this world. She will live in the memories of her devoted daughter Valerie, nephews Brian and Phillip Dawson, nieces Cheryl McKinney, Tracey Dennard and Carmen Butler, cousin Lorraine Barden and all those whose lives she touched. Shirley will rest eternally by her mother's side at United Memorial Gardens in Plymouth in the near future.

The family of Shirley Jean Dennard created this Life Tributes page to make it easy to share your memories.

Send flowers to the Dennard family.