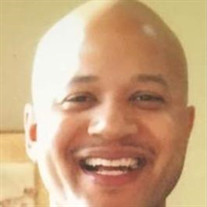 THE OBITUARY OF SHERARD DEL VAR LLOYD Sherard Del Var Lloyd was born to Sara Irene Azeez and Charles “Del Rio” Lloyd on September 29,1967, after his twin brother Shawn in Homestead, Pennsylvania (Allegheny County). Sherard moved with his family from Homestead, PA to Inkster, Michigan when he was four years old. He was a blessed man that also had adoptive parents Lee Williams III and Deborah Williams Mongo. His parents Sara, Charles, adoptive mom Deborah and his brother Tanya Lloyd preceded him in death. Sherard graduated from Inkster High School in 1985 where he was a star athlete on the Inkster Vikings Basketball Team. Upon graduating from high school, Sherard received a scholarship to play basketball at the University of South Alabama in Mobile, Alabama from 1985-1988. He transferred to West Virginia Wesleyan College in 1988 and continued as a star basketball player. Sherard graduated with a Bachelor of Arts Degree in Political Science in 1990. Sherard was blessed with a gregarious personality and huge stature of 6’7 inches. He was affectionately known as “Big Fella” by his college teammates and was loved throughout the Wesleyan Community. Sherard moved to Atlanta. GA. in 1990 after obtaining his B.A. degree. He resided in Atlanta over 20 years and moved backed to his hometown of Inkster, Michigan during his final years. Sherard had a love for jazz and poetry. He wrote and published a compilation of 45 of his poems capturing his thoughts on God, life and love. In 2002 Sherard published his book of poems, “Come and Hear My Heart Sing” using his middle name, Del Var as author. He enjoyed traveling and long-distance running. After only two weeks of training, Sherard ran his first half marathon in Hawaii; a few years later he ran a full marathon in Atlanta, Georgia. Sherard had a passion for taking and being in photos, especially those involving celebrities. With his million-dollar smile, great looks and larger than life personality, he was able to meet and take pictures with many of his favorite celebrities such as Dr. J, Grant Hill, Jean Luc Ponte, Herbie Hancock, Ruby Dee, Pam Grier and Ms. Patti LaBelle (we just love those pies). Sherard enjoyed and lived life to the fullest. During his later years, he started having severe health problems that impacted his mobility. He will be missed by his family, friends and acquaintances. He leaves to cherish his memory his adoptive dad Lee Williams III, siblings Raymond Hancock(Evelyn) Cassandra Lloyd, Marvin Lloyd, Gino Lloyd, Charlene Perry(Jeffrey), Charmaine Lloyd, Serena Lloyd, Kimberly Bobo(Karl), Felicia Serrano, Camille Serrano, his twin Shawn Lloyd, Lee Williams IV(Tina), Radiyyah Sulaiman and Sheila Williams. His three aunts Mary Simmons, Karweemah Bolton and Fatima Azeez, four uncles Donald Massie, Augustus (Gus) Massie, Ishak Abdul-Azeez, and Roktabija Abdul-Azeez and over 75 cousins, nieces, nephews and countless friends. Sherard also leaves behind his college buddy and best friend for over 30 years, Kado Wilks, a brother that Sherard has added to the family. He heals the brokenhearted and binds up their wounds. Psalm 147:3

The family of Sherard Del Var Lloyd created this Life Tributes page to make it easy to share your memories.

Send flowers to the Lloyd family.