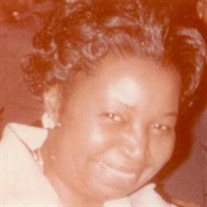 Sarah Kate Hendrix was born September 2, 1926 in Madison, Georgia to Joe and Lucy Mitchell. The family moved to Inkster, Michigan in 1929, where Sarah subsequently spent her life until her quiet departure Saturday, January 25, 2020. Sarah graduated from Inkster High School, Lewis Business College and was united in marriage to Phillip Hendrix who preceded her in death in 2004. To this union were four children. Sarah was very devoted to her children, she was a stay-at-home mother during the formative years of her children's lives and volunteered at their elementary school when asked to do so and served as the PTA president for several years. When her youngest child was old enough to attend school, Sarah took a "part-time" job at Eloise Federal Credit Union, never with the intention of working fulltime and ultimately retiring after 27 years. We dare to say that Sarah was probably the BEST employee Eloise Credit Union ever had. She was the person with whom everyone wanted to do business because they knew she was professional, would never divulge "their' personal business or finances with others. Sarah was always a person that could be trusted to maintain anything she was told to do in confidence. Sarah lived her life with dignity, style, grace, and achievement. Sarah grew up with the faith in God and worshipped regularly at Womack Temple CME Church in Inkster, Michigan as a faithful member. She supported the church when she was not able to attend due to medical reasons. Sarah cared deeply for the kingdom building of God's House. She let her light shine. She only spoke words that brought edification to God and others. Inkster knew Sarah and loved being in her midst sharing time and laughter. She always welcomed others in her home with a smile and kind words. She went out of her way to make you feel comfortable. Those left to mourn Sarah's passing and cherish her memory are; one son, Pierre R. (Linda) Hendrix (Detroit, Michigan, daughter Wanda A. Hendrix (Trussville, AL) daughter Sheila A. (Clarence) Richard (Las Vegas, NV), daughter Ida R. Hendrix (Detroit, MI), three grandsons: Gerald P. Hendrix (Mesa, AZ), Brian P. Hendrix (Detroit, MI) Michael S. (Yvonne) Hendrix (Johnson, RI), one great grandson, Maxwell S. Hendrix (Detroit, MI), one God daughter, Patina Ervin (Inkster, MI), two special cooks: Doris Horne (Inkster, MI) Gordon Marshall (Detroit, MI), nieces, nephews, cousins, other relatives, and friends. Sarah will be missed by her extended family, dedicated friends, longtime church members, and all of Inkster.

The family of Sarah Kate Hendrix created this Life Tributes page to make it easy to share your memories.

Send flowers to the Hendrix family.