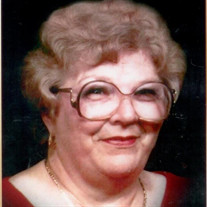 Rudolfine (Fini) Maria Ernegger Hendrix was born on September 19, 1928 in Vienna, Austria. She enjoyed an idyllic early childhood with her two older sisters Rosalina (Rosie) and Irene (Reni) experiencing the landscape lushness and European culture that she often recalled with fondness. The second decade of her life was series of life altering and changing with the death of her father when she was ten and World War II conflict that invaded her hometown. The other event was meeting and falling in love with the man who would be her husband at her 16th birthday party at café on the Danube River. Emanuel was an US Army sergeant stationed in the area in post war Austria. By her 20th birthday, Fini had become a war bride, gave birth to Emanuela (Mausi) in Austria, moved to America, and had their second child Rudolf (Rudy). The Hendrix family lived in Inkster, Michigan with Emmanuel's mother (Big Mama) who Fini always gave credit for teaching her how to cook American food and assimilating her into the new country and racial culture. In a newspaper article, Fini was quoted as saying "Being in America is like a dream." Fini's life was centered around her expanding family as Freman (Skip) and Roger were born. Her sister Reni, who was her best friend, married an American soldier and also moved to Inkster and started a family. Emanuel's extended family was part of her social circle. Their nuclear family circle was complete with birth daughters Terese (Terrie) and Lisa and special grandson David. Her children were her life. She embraced their lives and experiences as her own. As their families grew, she traded the name Fini for Oma (Austrian for Grandmother). Their families became her life as well. This was the name that affectionately family, friends, and neighbors all call her. Fini preserved her heritage through her shared memories with her sister and culinary skills i.e. apple pie, potato salad, lemon cake, and Schnitzel that became sought out items for family gatherings. Fini was able to return to her homeland several times. Her calm exterior was her ally. Her life experiences made her who she was...strong, formidable, and strongly opinionated of how things should be done, with resolve to get through any confusion or challenges in her way on her terms until the end. Oma departed this earthly life on October 6, 2019 and was greeted by husband Emmanuel, and children Roger and Lisa. She leaves a legacy of love her with her beloved family Emanuela (Mausi), Rudy (Kristina), Freeman (Elaine), Terri (Tim), David (Yolande), Krista (Roderick), Erin (Chad), Brett, Stephen (Jenni), Teryn, Tristyn, Timothy, Chole, David Jr., Kylee, Cameron, Adriana, Raven, Colin, Cas, and Joseph.

The family of Rudolfine Hendrix created this Life Tributes page to make it easy to share your memories.

Send flowers to the Hendrix family.