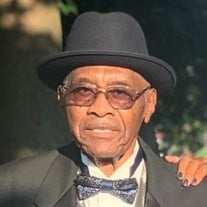 Roy Johnson Sr. was born October 8, 1932 in Georgetown, Mississippi to the union of Lute T. and Katie Mae Johnson. He was the oldest of four sons: Curtis, Clarence, and Leavie Johnson. He attended Brusher Creek High School until the 11th grade as he felt it would be more profitable to help his mother take care of his brothers while his father was looking for better opportunities for their family in different states. He was a natural born provider. He made sure his mother and brothers what they needed. He attended Brusher Creek Baptist Church in Georgetown, Mississippi in his youth. As a young man, he, his cousin, and a couple friends formed a Gospel quartet singing group named "The Dixon Boys." They were well-known gospel group that would perform at different churches. The famed Jackson Southernaires would complement them after every performance. In 1953, Roy Johnson's father sent for the family to move to Inkster, Michigan. He packed his mother, brothers, and his fiance, Dorothy Jean, to reconnect with his father in Michigan. In 1954, he married Dorothy Jean Thigpen and to this union 4 children were born: Roy Jr., Timothy, Theresa, and James. He gained employment at General Planting Company as a chemist and he retired in 1999. He also loved working on cars. Although, he ad no formal training on fixing cars, he began an exceptional auto mechanic. Deacon Johnson was a family man who enjoyed taking his family on vacations 2 to 3 times a year. He really enjoyed the unplanned vacations, where he would wake up the family and say, "Let's go!" He would eventually join First Baptist Church under the leadership of Pastor Keith Butler where he served as a faithful member. In 1992, he began to visit the Harrison Street COGIC (now Pentecostal Temple COGIC) under the leadership of then Elder Isaac King Jr. He became a member of Pentecostal Temple COGIC in 1995, when he gave his life to the Lord. His dedication to the Lord, the Lord's House, and the Lord's people became his priority as he desired to please God. He joined and enjoyed many ministries including the Men's Ministry, Bible Study, Men's Choir, Security Team, First Steps, and Greeters Ministry. Shortly thereafter, he became the president of the Greeters Ministry. Brother Johnson was elated when the late Bishop Isaac King Jr. asked him to become a deacon. He was nervous about accepting the position, but he gave it his all. His roles as Deacon and President of the Greeters, were responsibilities he held in high regard. As a deacon, he made sure the Lord's house was functioning properly and presentable to the world. Ecclesiastes 9:10, "Whatever you find to do with your hands, do it with all your might." As a greeter, he greeted with love to everyone as if they were his family. Psalm 84:10, "I would rather be a door keeper in the house of the Lord." He had a very calm and joyous spirit. It came naturally for him to put a smile on your face. He was a faithful member and on most occasion, was first to arrive at the church and made sure things were in order. Deacon Roy Johnson Sr. was given his crown of glory on Sunday, September 26, 2021 and was welcomed by his parents Lute T. and Katie Mae, wife Dorothy Jean, sons Roy Jr., Timothy, and James. Also preceding him death ate his brothers Curtis, Clarence, Leavie, and many others family members. He leaves to continue his legacy, his beloved daughter Theresa (Arthur) Hemphill, his loving grandchildren Shonda (Edwin Sr.) Jordan, Kenyatta Mickens, Darre Johnson, Kalika (Aaron) Mason, Kaleb Johnson, and his namesake Roy Johnson III. Adoring great grandchildren Edwin Jr., Jayden, Aaron, Jr., Michael, Josiah, JaSean, Benjamin, Tayah, JaRae, Karreah, and Asher, sister-in-love Leonia Brown and brother-in-love Robert Arnold. Very special cousins, Rena McLauren and Nancy Shepard and a host of nieces, nephews, cousins, and friends.

Roy Johnson Sr. was born October 8, 1932 in Georgetown, Mississippi to the union of Lute T. and Katie Mae Johnson. He was the oldest of four sons: Curtis, Clarence, and Leavie Johnson. He attended Brusher Creek High School until the 11th grade... View Obituary & Service Information

The family of Deacon Roy Johnson Sr. created this Life Tributes page to make it easy to share your memories.