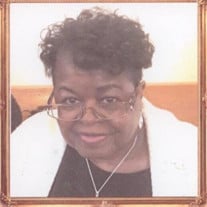 Rosie Lee Booze was born on September 1, 1932 to Robert Lee and Emma Booze in Earle, Arkansas. Rosie was the sixth of thirteen children. After a short stay on Clarksdale, Mississippi her family migrated to Inkster, Michigan. Rosie attended Inkster Public Schools. At an early age she professed her belief in Christ. On July 26, 1952 she married the late Rev. Joseph Edward Washington and into this union four unique children were born, Joseph Jr., Marilyn Ann, Mary L., and Georgette Lee. Rosie loved life and lived it well. She was very particular about her appearance, especially her hair. There was never a strand out of place. She was an immaculate housekeeper and an awesome cook. She had a way about her you could not help but respect. To know her was to love her. She truly loved her family and look forward to attending the family reunions. One of her most significant accomplishments was receiving her GED in June of 1977, after raising her children. That was one of the happiest days of her life. Rosie enjoyed spending time with her grands and great-grands. One of her favorite past times was playing connect with her granddaughter Charlene, although she rarely won. She loved talking and ALWAYS knew what she was talking about. You may not have agreed with her then but somewhere in time you would say to yourself and maybe to others "She was right!" September 1, 2019 she celebrated her 87th birthday surrounded by her sisters, her children all her grands and great-grands, as well as her nieces, and nephews. Precious memories were made for all on that day. Her health began to fall shortly after that special day. On November 27, 2019 her Lord and Savior Jesus Christ sent his Angels to escort her home, letting her know that her job was completer and it was time for her to rest. Rosie leaves to rejoice in her memory one son Joseph Edward Washington Jr., three daughters: Marilyn Doyle, Mary Washington, and Georgette Washington; two sisters: Earlene Bailey and Bessie (Clyde) Battle; fourteen grandchildren, thirty-one great grandchildren, one God son Demetrius Griffin, one God daughter Shree Gilreath who is the daughter of her most dearest friend Barbara Gilreath; four special people that loved her like she birthed them, Charles McGhee, Jackie Russell, Marvin Lewis, Yvonne Taylor and a host of other relatives and friends.

Rosie Lee Booze was born on September 1, 1932 to Robert Lee and Emma Booze in Earle, Arkansas. Rosie was the sixth of thirteen children. After a short stay on Clarksdale, Mississippi her family migrated to Inkster, Michigan. Rosie attended Inkster... View Obituary & Service Information

The family of Rosie Washington created this Life Tributes page to make it easy to share your memories.