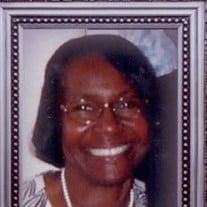 Rosie Lee Jones was born on January 7, 1933 in Coffeeville, Mississippi. She was the youngest of 14 children born to Rosie and Melkie Jones. Her parents and all of her siblings preceded her in death. Rosie moved to Michigan right after high school and lived with her brother William and sister-in-law Hattie Jones. She met and married Roosevelt Bowens and to this union two daughters were born, Patricia Steel and Pamela Harris. Patricia Steel her in death. In March 1982, she married Caleb Eaddy with whom she enjoyed a wonderfully close and warm marriage. Caleb preceded her in death. Rosie was very active with her family as well as in the community. She loved her family and valued family time. This prompted her to start the Jones Family Reunion, which still carries on today. Rosie also loved baking and volunteering. On numerous occasions she had the privilege of making wedding and birthday cakes for numerous people. Because she loved her family so, she made the decision to come out of retirement to make one last wedding cake for her nephew Louis Jones Jr. which she considered to be an honor. Rosie served the community as well as her church. She served as a troop leader of the 4-H club for many years. This included taking the neighborhood kids camping every year, teaching them how to sew, cook and do crafts. She volunteered for Kamanos Cancer Center and set up the first Cancer Center office at Amity Baptist Church, Inkster, Michigan. In May 2002 Governor's Honor Roll Award for her devotion of countless hours as a volunteer work at Karmanos, Rosie also served on the Mission Board at New Jerusalem Missionary Baptist Church. She arranged for the church to participate in the annual Inkster Memorial Day Parades. Rosie raised to lovely daughters that followed in her footsteps. Pat followed her footsteps as a volunteer for Karmanos, until her death. Pam followed in her footsteps of baking cakes. She was so proud of them. Her wish was to have the kids and grandkids together on vacation. Pat and Pam got together, took her and family to Gaitlinburg, Tennessee. She had the best time with everyone under one roof for the entire weekend. She also enjoyed spending time with her canine companion "BARI" who stood faithfully by her side. She leaves to cherish her memory: her daughter Pamela Harris, five grandchildren Takyra of Tampa, Florida; Tyra of Atlanta, Georgia; Kevin of Davenport, Iowa; Terrell of Inkster, Michigan, and Tylan of Los Angeles, CA); six great-grandchildren (Arrion, Izayah, Miles, Tajuan, Tyiece, Zander) one step-son: Leroy Eaddy; four sister-in-law (Betty, Dora, Hattie, Liza) A special family friend Lorenzo Reed whom she referred to as her son. A host of nieces, nephews, and friends. A special thank you to her niece, Char Smith, and granddaughter, Lavetra Eaddy-Shaw, for being healthcare workers and devoting their time out to be caregivers for her.

Rosie Lee Jones was born on January 7, 1933 in Coffeeville, Mississippi. She was the youngest of 14 children born to Rosie and Melkie Jones. Her parents and all of her siblings preceded her in death. Rosie moved to Michigan right after high... View Obituary & Service Information

The family of Rosie Lee Eaddy created this Life Tributes page to make it easy to share your memories.

Rosie Lee Jones was born on January 7, 1933 in Coffeeville, Mississippi....

Send flowers to the Eaddy family.