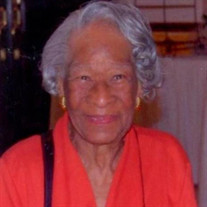 Rosie Belle (Searcy) Black was born on April 27, 1919, in Talbotton, Georgia. As an infant, she was brought to Detroit, Michigan by her adoptive father Rev. Samuel Searcy and his wife, who nurtured and raised her. Rosie completed her education in the Detroit Public School System, where she graduated from Miller High School. In 1941, Rosie married the love of her life William Black, and they were inseparable ever since. During their 54 years of love and marriage, Rosie and William welcomed three children into the world, William Van, Delores, and Vera Mae. In 1943, the couple decided to move from the city of Detroit to Willow Run, Michigan. They would later migrate Napkin Township, now Westland, Michigan in 1955, where they would raise their family. In her work life, Rosie worked for the Children's Hospital in Detroit, Michigan, the Ypsilanti State Hospital and later the Northville State Hospital as am attendant nurse, where she would retire. After retirement she did volunteer work in the Inkster Public School District. Rosie and William joined the People's Community Baptist Church of Westland, under the pastorate of Rev. John Hearn Sr. and current leadership of Rev. Vincent Matthews, where she faithfully served many years. Rosie served on numerous church auxiliaries. Two of her favorites were serving on the usher board with her husband and later being honored as a mother of the Church. Rosie was all about her family. She enjoyed gardening and traveling with her husband. One of her most exciting trips was to Hawaii. After the passing of her husband, she and her family went on a cruise to the Bahamas. Rosie was generous, kind-hearted, and could always give good advice. She was like a mother and grandmother to all who knew her. Rosie was a woman of class and elegance. With mobility problems occurring later in her life that required daily assistance for her everyday routine; Rosie became a resident at the American House Senior Assisted Living Community in Dearborn Heights, Michigan for 2 1/2 years. Nevertheless, she never allowed her physical limitations to hinder her spiritually. She loved to read and study her bible. She loved the Lord with all her heart. With various trails and triumphs, Rosie knew where all her help come from, and that was from the Lord. She is a testament of God's grace to have lived a blessed life for 102 years. On January 8, 2022, Rosie was called home by her Heavenly Father. She leaves to cherish her memory; children William Van Black Sr. (Earlene) and Vera Rogers. Her sister, Catherine Barnes, son-in-law Eddie Jordan Sr., grandchildren; William Eugene Jordan (Nancy), Eddie Jordan Jr. (Daniella), Mary Rogers, Walters Rogers Jr., Great grandchildren; Mandisa M. Black, William Van Black III (India), Joshua Jordan, Jasmine Black, Caleb Jordan, James Riddick, Delores Jordan, and Rosie Jordan. One great-great- grandchild, Kayden Michael Williams. She is preceded in death by her husband William Black, her daughter Delores Jordan grandson William Van Black Jr., adoptive parents Rev. Samuel Searcy and Jessie, Mother Daisy Bailey, Aunt Margret Daniels, brother Wiley Leonard Jr, sisters Mariola Earl, Johnnie Mable & Elizabeth (Lizzie) Johnson.

Rosie Belle (Searcy) Black was born on April 27, 1919, in Talbotton, Georgia. As an infant, she was brought to Detroit, Michigan by her adoptive father Rev. Samuel Searcy and his wife, who nurtured and raised her. Rosie completed her education... View Obituary & Service Information

The family of Rosie Black created this Life Tributes page to make it easy to share your memories.

Send flowers to the Black family.