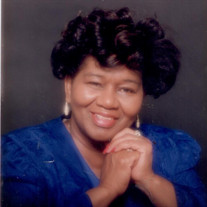 ROSE ANN ALSTON(O'DONALD) was born on May 22, 1939 in Ethel, Arkansas to the late Seliccia Jones-O'Donald and Golden O'Donald. Rose moved to Detroit Michigan with her brother McKinley O'Donald at the age of eighteen to further her education in social work. She met the love of her life John R. Alston at a formal church dance. They fell in love and married and had three sons, John, Michael and Kenneth Sr. and a stepdaughter Ariel. Rose started her professional career working for Wayne County government then transitioned to the State of Michigan, where she worked 30 years until she retired. She had many causes that she was passionate about and supported such as disabled veterans, the heart association and food insecurity non-profits. Rose also organized and ran an urban garden in her community. Some of her hobbies were gardening, bingo and going to the casino. Her greatest passion was her grandchildren. There wasn't a day gone by where Rose didn't ask, call or talk about her grandchildren. Rose is preceded in death by her brothers Joe O'Donald, McKinnley O'Donald, Senelvin O'Donald, Roy-Glen O'Donald, sister Audrey O'Donald-Webb and son Kenneth Alston. She leaves to cherish her legacy; brother Billy O'Donald, sons John Alston Sr. and Michael Alston, and grandchildren John Jr., Jamaal, Jordan, Jasmin, Mikela, Michael Jr., Juwan, and Kenneth Jr. We will all remember Rose's voice, laughter, her passion for current events and her ability to keep you on the phone for hours. Most of all we will remember her favorite saying and quotes. Those who knew Rose will forever be touched by her love and humor.

ROSE ANN ALSTON(O'DONALD) was born on May 22, 1939 in Ethel, Arkansas to the late Seliccia Jones-O'Donald and Golden O'Donald. Rose moved to Detroit Michigan with her brother McKinley O'Donald at the age of eighteen to further her education... View Obituary & Service Information

The family of Rose Alston created this Life Tributes page to make it easy to share your memories.

Send flowers to the Alston family.