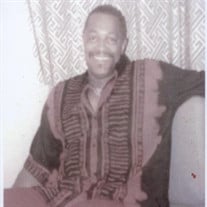 Robert Edward Cooley was born November 12, 1940 in Greenwood, Mississippi to the union of Louis Cooley Jr. and Effie Mae Holmes-Cooley, who both preceded him in death. He was the eldest of two children. His family relocated to Michigan in 1941 and settled in Inkster, hoping to find greater opportunities for success. Robert was a man of faith and gave his life to the Lord at a young age. He received his education through the Inkster Public School District prior to enlisting in the United States Armed Forces in 1962 upon completion of basic training, Robert was stationed in Tacoma, Washington. Robert foind love in Katharine Rosemary Stout, the woman who would become his beautiful bride on April 14, 1962. While stationed in Tacoma, Robert and Katharine started their family with the birth of their first daughter, Suzette Marie who also preceded him in death. To their union three more children were born Della Lynn, Erika L., and Robert Louis. Robert was dedicated to being a provider for his family, following his honorable discharge from the military, he was proudly employed with Ford Motor Company for 32 years before retiring. Robert was a strategist with a brilliant mind. This is one of the reasons he was so passionate and skilled in the game of chess. He was also extremely athletic, maintaining a passion for physical fitness throughout his life. He was a martial arts champion, winning many trophies and titles competing in Isshinryu karate. He was a teacher and loved instructing students in both karate and weight training at Cooley's Place Dojo. He was proud of his family and the life that he worked diligently to achieve. He was well known in his community as a strong willed individual with a no nonsense attitude. Robert began everyday with a greeting to his bride, "Good morning my everything". He was a loving husband, proud father, ad adoring grandfather. Robert leaves to cherish his memory and carry on his legacy his phenomenal wife, Katherine or Kat as he affectionately called her, his loving children Della (Tyrone) Cooley, Erika (Christian) Clark, and Robert (Laurie) Cooley, his sister Mamie Hollis, his grandchildren Shekira, Sharrah, Kevin, Kaaly, Christian-Anthoni, Robert, and Melody, and his great granddaughter Sarriah.

Robert Edward Cooley was born November 12, 1940 in Greenwood, Mississippi to the union of Louis Cooley Jr. and Effie Mae Holmes-Cooley, who both preceded him in death. He was the eldest of two children. His family relocated to Michigan in 1941... View Obituary & Service Information

The family of Robert Cooley created this Life Tributes page to make it easy to share your memories.

Send flowers to the Cooley family.