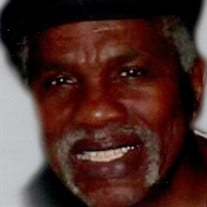 Revius Alex Williams was born July 8, 1936 in Delray, Michigan. He was the youngest son of Nathaniel and Leola Williams. He was affectionately known as "Toosie", a name given to him by his oldest sister, Barbara. He was preceded in death by his parents, his sisters Barbara and Debbie and his brothers Clyde and Rudy. When Revius was three years old, the family moved from Delray to their home on Beverly Rd. in Romulis, MI (Jones Sub neighborhood). He would often tell stories of the mischief that he and his older brothers Rudy and Clyde got up to daily. He was very close to his brothers in to adulthood, sharing time wrestling together in the Amateur Athletic Union. Revius became a father for the first time when his oldest daughter, Charlene, was born to him and Annie Pearl Davis on August 29, 1955. In 1956, Revius enlisted in the United States Navy, serving four years. His time in the service afforded him the opportunity to travel the world. He was even able to climb Mount Fujiyana in Japan. The same year he enlisted in the Navy, Revius married Theresa Louis Hendricks. When it wasn't certain that he would be granted leave to attend the wedding, Revius contemplated going AWOL so that he could be at the ceremony. Thankfully, his leave was granted and he was able to marry Theresa without a hitch. This is but one example of his dedication to her. Their marriage spanned six decades, producing three children, Regina, Reginald, and Rhonda. Revius and Theresa were absolutely devoted to each other until the end. His love foe her was timeless; he still called her his girlfriend, even after 63 years of marriage. Revius was a supportive father who loved his children and a doting grandfather who spoiled his grandchildren. He was a fun father figure to many children. Often the neighborhood kids would come to their door to ask "Can Mr. Williams come out and play?" Always a protector and provider for his family with a strong work ethic, Revius would sometimes work up to 4 jobs to make sure that he provided for his family. His philosophy was, if your income isn't enough, generate more. Revius worked for 46 years at the Veteran's Administration Hospital in Ann Arbor, MI. He started out as an orderly and through the years, worked his way up until he was the Director of the Animal Research facility. It was there that Revius formed lasting friendships with his co-workers. He also worked for 32 years at The University of Michigan as an animal caretaker. While Revius worked hard he also played hard. He was not your typical man, always willing to try new things, to seek adventure off the beaten path. He cycled, camped, white water rafted and windsurfed. He traveled the world to ski to Switzerland, Austria, Italy, Yugoslavia, Canada, and France. He traveled to Canada and Alaska to fish. Revius had an eclectic taste in music and he passed his love of music to his children, though he had absolutely NOTHING to do with their singing talent! He was an amateur photographer and guitar player. After retirement, he loved watching television and had watching companions for specific shows: Judge Judy and Mathis with his granddaughter Vanessa, Dr. Phil with his brother, Rudy. An avid fan if Michigan football, he passed his love of the game on to his youngest granddaughter, Ntondele, with whom he would watch the game every Saturday. It was also in retirement that Revius developed a personal relationship with God. He came to know Christ and joined Theresa as a member of Cathedral of Faith Church in Detroit, MI where he served as a member of the Aaron and Hur Men's Ministry and as church security. Revius leaves to cherish his memory, his wife and eternal girlfriend, Theresa; his children Charlene, Regina, Reginald (Deborah), and Rhonda (Alain); his grandchildren Janelle, Chaz (Darlyn), Reginald II, Miya, Vanessa, Senguele and Ntondele; one great-grandson. Ayden and a host of nieces, nephews, in-laws, cousins, and friends.

Revius Alex Williams was born July 8, 1936 in Delray, Michigan. He was the youngest son of Nathaniel and Leola Williams. He was affectionately known as "Toosie", a name given to him by his oldest sister, Barbara. He was preceded in death by... View Obituary & Service Information

The family of Revius Williams created this Life Tributes page to make it easy to share your memories.

Send flowers to the Williams family.