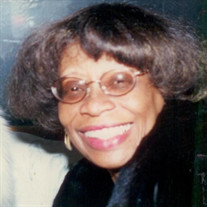 Reasther (Jenkins) Everett affectionally known as “Rea” was born in Kinston, North Carolina on June 27, 1935 the only child to Carl Taylor and Vivian Jenkins. In her younger years she lived in Brooklyn, NY where she spent plenty of time with her favorite aunts Winnie, Letha, and Ruby. Reasther was an obedient child and a good student. She attended elementary school in New York and graduated from Adkin High in 1952 and remained an active alumnus. She also received technical education from William D. Ford Vocational/Technical Center and Dorsey Business School. She met army marine Arnell Everett (originally from Mississippi) in 1952 and married in July 1953. In 1955 they moved from an apartment in Detroit, MI to their first and only home in Annapolis Park in Westland MI. This was a proud moment for them both as African American home ownership was restricted during these times. Reasther often mentioned how proud she was that Annapolis Park was listed on the National Register as a Historic District in 2006. Arnell and Reasther raised their 6 children during their union. Donald, Richard, Anthony, ViLinda, Terrance, and Veronica. Reasther was known for beautifully decorated home and how spotless she always kept her home. Everyone who knew her knew keeping a clean, neat home was her top priority. She was also known for being kind, compassionate, loving, and giving. She would help anyone she encountered when she saw a need. Reasther was also known her style and grace. No matter what the occasion, she was going to show up dressed to the nines. Reasther led a fulfilling productive life. For more than 60 years she has been a member of St. James United Methodist Church. She served as chairperson of the Outreach Committee and was on the Pastor Parish Relations Committee. She served God and her church with prayers and her time. She has been an outstanding volunteer in the community for more than 60 years. As volunteer coordinator for the Wayne County Retired Senior Volunteer Program (RSVP). She recruited, trained, and assigned volunteers to designated sites. She also serviced as a Family Service Advocate for Wayne County Family Center, facilitating, and expediting adaption to independent living arranging for residents. She helped with community service agency opportunities, school enrollment and transportation, obtaining job placement and health care services. She worked with homeless families developing wish list of their needs and collecting donations to fulfil their needs. She was appointed by Wayne County to serve as community liaison to prevent and assist homeowners facing mortgage foreclosures. Reasther is best known for being a long time community activist. She playfully called herself the “Self-Appointed Mayor of Westland” and contributed greatly to the progression of city of Westland and to the advancement of the African American community. She was very much involved with political elections and many local candidates called upon her for support. During her lifetime she established many achievements. Founding member of the Southeast Westland Homeowners Association, Lifetime member of the NAACP, Westland’s First “Citizen of the Year” Award Recipient, Wayne County “Mother of the Year” award recipient, just to name a few. Despite all her awards and accolades her biggest achievement was her family. She expressed her love for her family and demonstrated it every chance she could. She was a loving wife, mother, grandmother, great-grandmother, and friend. Her smile and affectionate laugh brought a smile to all around her. Reasther went to be with her Heavenly father on Saturday, October 16, 2021 at the age of 86. She leaves to cherish her memories: her loving husband, Arnell Everett, 4 sons, Donald Waddell, Richard Everett (Paula), Anthony Everett, Terrance Everett; two daughters, ViLinda Everett and Veronica Bonner. Five grandchildren, Shontell Everett, Brett Everett, Anthony Everett II, Latoyia Lewis, and Isaiah Bonner. Twelve great grandchildren, Darius Osborne (Ian), Devin Osborne, Karana Everett, Braighana Everett, Bralon Everett, Taylor Norris, Noah Bass, Natayia Bass, Lewis Norris Jr, Barak Holmes, Darnejah Davis, Cove’ae Lewis and a host of family and friends.

Reasther (Jenkins) Everett affectionally known as &#8220;Rea&#8221; was born in Kinston, North Carolina on June 27, 1935 the only child to Carl Taylor and Vivian Jenkins. In her younger years she lived in Brooklyn, NY where she spent plenty... View Obituary & Service Information

The family of Reasther Everett created this Life Tributes page to make it easy to share your memories.

Send flowers to the Everett family.