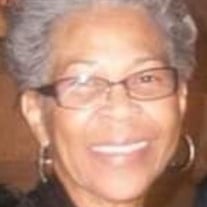 The following is a great story ...a story that details the journey of a beautiful lady, which has its beginning in Auvergne, Arkansas, September 21, 1947. The place and ate which began the path of life for Evangelist Phyllis Jean McClay. Her parents were the late Eva Dell and Newton Ethington Sr. She was one of nine children born to this union. Phyllis relocated with her family to Willow Run, Michigan at an early age. Phyllis received her education in the Willow Run Public Schools, graduating in 1966. Not long after graduating high school a smitten young man name Freddie Stovall (who preceded her in death) began courtship, and married Phyllis, to which four children were born to this union. On one hot summer day in 1973, Phyllis attended an afternoon worship service at Messias Temple Church in Ypsilanti, Michigan. Phyllis was saved and filled with the Holy Ghost in that service, and never looked back. Phyllis joined Bethlehem Temple Pentecostal Temple Church in Detroit, Michigan, under the pastorage of the late John R. Hemmingway Sr., where she was a faithful member for many years. Even though she had four young children, and now was a single mother she would be there faithfully with children in tow. Phyllis later united in holy matrimony with Larry McClay Sr. This woman of God never met a stranger, she was not shellfish with her love and concern. She would defy her personal time to check in on the sick, bereaved, and shut-in; help making others happy seemed to one of her ultimate goals. When one needed a friendly hand to touch or an ear that listened tenderly and spoke uplifting words of encouragement Evangelist McClay was there. Phyllis was very gifted in crafting, drawing, and sewing. She often made lap handkerchiefs for church members, never charging, but instead just giving them away as a blessing. Phyllis would often make up food boxes and care packages and blessed the Saints of God and the less fortunate. Evagelist McClay later joined High Praise Cathedral of Faith under the pastorage of Apostle Clarence B. Haddon Sr. and Prophetess Dr. Joyce R. Haddon, and was a faithful member, praise and worship leader and teacher until her health challenge began. Phyllis was hired and began working at "The Ford Motor Company" plant in Ypsilanti, Michigan on 1973 and retired in 2006. Giving thirty-three years of faithful service while sharing her beautiful smile and enthusiasm for caring and sharing with others. After her retirement form "The Ford Motor Company" Evangelist McClay and her husband late Deacon Larry McClay Sr. continued with God's service adopting their four great-grandchildren. Even though Phyllis had remarried, she never forgot about the love she shared for her Stovall family and in-laws, always making it her priority and pleasure to go and see about her other mother Mary Stovall. Phyllis was the epitome of a virtuous woman, always carrying herself with grace, class, dignity, and holiness. Her dress and style were truly immeasurable. Down through the years Phyllis McClay continued her unwavering service in Christ, as but not limited to Evangelist, Missionary, Sunday School Teacher, Young People President, and Praise and Worship Leader. "Oh What a Praise Leader"! Even going through the loss of her husband and her health challenges, Phyllis never stopped praising and believing GOD. Evangelist Phyllis Jean McClay made her transition from earth to glory on October 31, 2019. She was preceded in death by her husband Deacon Larry McClay Sr. her parents, Eva Dell and Newton Ethington Sr., six brothers (Newton Jr., W.G., Walter, Lucious, James, and John Ethington.) and one sister Cathy Ethington Reed. Phyllis leaves to cherish her loving and ever glowing radiant spirit with her children, (Her devoted caregiver) Maria. Carol, Maurice, Vance (Ann), two brothers Clyde (Leeza), and Leonard (Cynthia). Ten grandchildren, six great-grandchildren, three great-great grandchildren, and a host of nieces, nephews, cousins, extended family and friends.

The following is a great story ...a story that details the journey of a beautiful lady, which has its beginning in Auvergne, Arkansas, September 21, 1947. The place and ate which began the path of life for Evangelist Phyllis Jean McClay. Her... View Obituary & Service Information

The family of Phyllis McClay created this Life Tributes page to make it easy to share your memories.

The following is a great story ...a story that details the journey...

Send flowers to the McClay family.