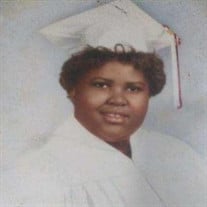 Patricia Denise Warnsley was born on October 25, 1957 to the union of Clenis Mack Warnsley and Drucile Warnsley (both preceded her in death). She was the fourth child born into the family of six. Patricia was affectionately known, as "Pat, Auntie Pat, and Patty" to her family and friends. Patricia accepted Christ as her personal savior as she grew up in Mission Baptist Church, under the teaching Ministry of Reverend A.B. Searcy. As an adult she continued her walked with Christ at Carlyse Church of Christ, later she joined Annapolis Park Church of Christ and Community Church of Christ. Pat attended Westwood Public Schools graduating from Robichaud Sr. High. She furthered her education at Virginia Ferrell Beauty School and became a licensed Cosmetologist. Later, she attended and graduated from Culinary Arts School and became a cook. She worked and volunteered at many places, including Westwood Public Schools as a crossing guard and cook. She volunteered as a cook and child care worker at Annapolis Park Church of Christ. Her last job being a cashier at Advantage Living Center where she resided. Patricia met and married Johnny Cooper, (who preceded her in death). She was also united in Holy Matrimony to Victor Long and later a devoted companion in Theodore Gilmore who preceded her in death. Pat was a kind and loving person who loved to spend time with her family and friends. She was a devoted aunt to all the children whom spent time with although she never had children of her own. She leaves to cherish her precious memories three sisters, Bertha Carter (Silas), Lillian Herzberg (William), and Lisa Perry (Ronald). She had two brothers who preceded her in death. Ronnie Clenis Warnsley and Tommy Warnsley. Patricia had twenty-seven nieces and nephews, thirty-seven grand nieces and nephews, and seven great great grand nieces and nephews (one preceded her in death). Pat had her "best friend" cousin, Karen Phillips and her growing up best friend Eurlean Davis. Her devoted church members, Darlene Mungo, Peggy Askew, Taryn Miller, Reco Bryant, Andre Thomas, Karen Christon, Rita and Roger Morris. These people were joy to Patricia during her stay in the nursing facility, taking her out to lunch and sometimes dinner, washing her clothes, having bible study with her, bringing her hair care products and sometimes junk and healthy food. They even brought the entire choir on Sunday to sing to her. I would like to say thank you from her entire family. You all loved on our Patricia. Pat also leaves a host of many relatives and friends.

Patricia Denise Warnsley was born on October 25, 1957 to the union of Clenis Mack Warnsley and Drucile Warnsley (both preceded her in death). She was the fourth child born into the family of six. Patricia was affectionately known, as "Pat, Auntie... View Obituary & Service Information

The family of Patricia Denise Long created this Life Tributes page to make it easy to share your memories.

Send flowers to the Long family.