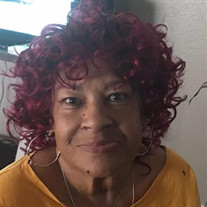 Patricia Margaret Hollins known to all whom loved her as "Pat", was born on July 18, 1942 in Inkster, MI to Lamar and Johnnie Mae Thomas, both of whom preceded her in death. Pat was the second of twelve children and the oldest girl. Her sibling Anthony Thomas, Lamar Thomas, Michelle Bridgeforth and William Thomas all preceded her in death. Pat attended Inkster Public Schools and graduated from Inkster High School in 1960. She had many jobs from Days beauty supply and United Shirts where she was the manager. She went to cosmetology school because she had a passion for doing hair, and boy could she press some hair. She retired from being a hairdresser. Pat had 4 children, three daughters, and one son. She moved to Detroit and met and married her husband Lawerence Hollins, whom preceded her in death. Pat loved and raised her children to be wonderful people, and they gave her many grandchildren in return. She was such a loving, fun, and beautiful woman. She prided herself on being the best grandmother to all of her "granny babies" as she would call them. She loved to cook, party, dance, shoot pool, play bingo and spend time with her grandchildren and great-grandchildren. She was always the life of the party. She was a jazzy woman, a fashionista. everyone loved Pat because you could always count on her fo a good laugh, great, real advice, and even recipes although she never measured anything. She would tell you to just "measure it with your eyes" and you did just that and it turned out good. She decided she wanted a change and moved from Detroit in 2017 and settled in Las Vegas, Nevada where her son Edward and two grand-daughters, Yolonda and Jasmine lived. During her time in Vegas, she was also blessed to have her sister, Debra, daughter Sherone and great-granddaughter Danyel to come and be her caretakers all at different times. She always felt love no matter where she lived from her entire family. Pat definitely lived her life to the fullest with no regrets, only amazing memories. Patricia Margaret Hollins leaves to mourn her three daughters, Pamela Russell (Louis), Antoinette Sampson (Terrance), Sherone Taylor, and her one and only son Edward Solomon (Gabby); three sisters Sandra Horton, Monica Mealing (Sigmund), and Deborah Finley; four brothers, Ronald Thomas Sr. (Ann), Darryl Thomas (Stephanie), Frederick Thomas (Lily), and Robin Thomas; twenty-six grandchildren; fifty-six great-grandchildren.

Patricia Margaret Hollins known to all whom loved her as "Pat", was born on July 18, 1942 in Inkster, MI to Lamar and Johnnie Mae Thomas, both of whom preceded her in death. Pat was the second of twelve children and the oldest girl. Her sibling... View Obituary & Service Information

The family of Patricia Margaret Hollins created this Life Tributes page to make it easy to share your memories.

Patricia Margaret Hollins known to all whom loved her as &quot;Pat&quot;,...

Send flowers to the Hollins family.