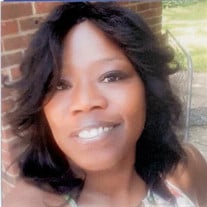 Oweeta Jernell Wilkins was born May 21, 1974 in Ypsilanti, Michigan to Jernell and Otha Wilkins. She attended school in Ypsilanti and Romulus, Michigan. Oweeta graduated from Romulus Sr. High School in 1992. She had dream of becoming a middle school English teacher. Oweeta held a series of jobs through her late teens and early twenties. Oweeta began her family in 1999 with the birth of her daughter, Gia. During that time, Oweeta eventually joined Metal Improvement Company where she had many beloved co-workers with whom she shared many laughs and tears through the years. One of those co-workers, Daniel Glegola, eventually became her husband. To this union, two sons were born. Owen in May 2007 and Aaron in December 2008. Oweeta continued with Metal Improvement until her untimely departure. Oweeta was a very hard worker. She was very funny and had a dry, sarcastic sense of humor and wit. She could slice you to the bone, real quick...and often did, she didn't play. But ironically, that doesn't explain her at all. It was just an outer shell. She was actually very sensitive and giving and always putting everyone before herself. She was a single mom...and she was a very good mother at that. She loved her children dearly. we admired her for hoe hard she worked and how dedicated she was to her family. Our mom has stage 4 lung cancer and is not well. Oweeta would go over there and help take care of her after she got off a long shift at work. she would take her boys to all their practices and go to all their games, awards and shows, and take her daughter to work. Always on the go, Oweeta would give you the shirt off her back if she thought you needed it. We didn't know how she did everything mostly on her own. She worked a lot of overtime but still didn't really make a lot of money. Somehow, she was still good at keeping everything going anyway. We often would tell her how proud of her we were of her for that. To which she would reply, "Just doing what I gotta do." Oweeta and her children had a bustling family life that was filled with love and uncontrollable laughter. Oweeta suffered an untimely death via a tragic car crash on June 28th, 2019. Left to mourn are her beloved children Gia and Owen, her parents, Otha and Jernell Wilkins, two sisters; Adrena (Lamar) Crowder; Jeriesha (Jeremy) Wilkins-Usry, 2 nieces, Amara and Lauryn Crowder and a host of aunts, uncles, and cousins and friends who she loved and was loved by dearly. A large void is left in their livres and she will be truly missed. Oweeta is preceded in death by her grandparents: Betty and Napolean Nelson, Jeff and Noleen Wilkins, two beloved aunts: Joslyn and Bettina Nelson.

Oweeta Jernell Wilkins was born May 21, 1974 in Ypsilanti, Michigan to Jernell and Otha Wilkins. She attended school in Ypsilanti and Romulus, Michigan. Oweeta graduated from Romulus Sr. High School in 1992. She had dream of becoming a middle... View Obituary & Service Information

The family of Oweeta Glegola created this Life Tributes page to make it easy to share your memories.

Send flowers to the Glegola family.