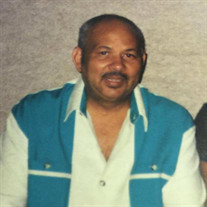 Norah Odell White, was born July 26, 1941, in Inkster, Michigan to Nora and Johnnie Eva (Glover) White, both of whom preceded him in death. Norah was the first born, and only son to that union. He was educated in the Inkster Public School system, Class of 1959. Horah, affectionately called "JR" by his family, started his work career with his uncle Obie Glover and Grandfather Willie Glover in their respective stores/markets. In 1966, Jr., gained employment for Ford Motor Company Truck Plant, Wayne Michigan. Retiring with forty-three years of dedicated service. While employed with Ford, Jr., recommended several minorities for employment and they were thankful for his help in securing positions at the "Plant". Some of whom he helped are still employed with Ford or since retired. Norah Jr., was also known as "Hurricane" by is Hell Raiser Motorcycle Club family. He enjoyed fast cars and his Harley Davidson motorcycle. He rode with the Hell Raiser of Detroit MC from 1971 until his health no longer permitted. Hurrican was a charter member of the club, wearing many hats. He was the cook, treasurer and chauffer at times. He won numerous trophies racing his motorcycle and because of his daredevil stunts and bike wheelies, we called him the "Black Evel Knievel" back in the 60's. Norah Jr., was kindhearted, very generous, loving beyond fault, extremely handsome and a help to many families far and wide. Jr. was also our family BBQ man!! Whenever the pits were smoking, it was Jr., in the front of the grills. Family and friends also enjoyed his homemade hog head cheese at Christmas time. Norah Jr., married Dovie Brooks, who preceded him in death. To this union, two beautiful, loving daughters were born. Felicia and Kim White, who he cherished with his whole heart. They faithfully cared for him during his illness along with Gable Searcy and family and friend, LaRhonda Johnson. Norah Jr., was baptized at First Baptist Church of Inkster, Michigan. During his convalescence, his daughter Kim lead him to the Salvation Prayer which he then accepted Jesus Christ as his Lord and Savior. In 1974, Norah Jr., was united in marriage to Jean Fuller (who remains his forever friend). They blended together a family of three boys, Donnie, Dale and Johnny Fuller. In addition to his parents, Norah was predeceased by one sister, Jessie Mae White; two brothers-in-law, Benjamin Hayes and Larry Locke. Norah leaves to cherish his memory, daughters Felicia and Kim White; two grandsons, Kevin Myles and Gregory Williams; three great-grandchildren, Dasia Myles and Alexis and Isaiah Williams; four sisters and two brothers-in-law; Annie Hicks (Rene) of Belleville, Michigan, Lilly Hayes of Plymouth, Michigan, Mary White of Detroit, Michigan and Carolyn Taylor (Hervey) of Avon, Connecticut. Special friends, Gable Searcy and family, Penie Brantley, LaRhonda, Devin and Renard Johnson, Carolyn Walker and Noah Faust. Eleven nieces and nephews, thirty-four great-nieces and nephews, his Hell Raisers Brothers of Detroit, Michigan and a host of cousins relatives and friends.

Norah Odell White, was born July 26, 1941, in Inkster, Michigan to Nora and Johnnie Eva (Glover) White, both of whom preceded him in death. Norah was the first born, and only son to that union. He was educated in the Inkster Public School... View Obituary & Service Information

The family of Norah "JR/Hurricane" White created this Life Tributes page to make it easy to share your memories.

Send flowers to the White family.