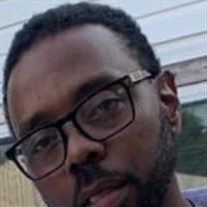 Micol Raymond Jones was born March 27, 1979 to Carla Bride and James Jones. Micol graduated from Detroit Public Schools. He enjoyed playing, writing, and producing music from a very early age and was famous for his beats. Micol enjoyed playing video games as a young child which continued on as an adult (during his down time). He enjoyed dancing and was such a good dancer that he won a few dance contests. Micol was very talented with his hands and could turn a dump into a beautiful home to be admired by all. He was a perfectionist and it showed in all of his home improvement projects. He was in high demand and stretched himself very thin trying to please his customers. Most of all, Micol enjoyed spending time with his family and friends just chillin'. In 2005, Micol met the love of his life and through this union four children were born. He leaves to cherish in his loving memory, Catrina Jackson; five children: Ariana Williams, Micol Jones Jr., Charlie Marie Jones, Ethan Jones, and Chase Jones; his parents: Carla and Lawrence Bride and James Jones; nine siblings: Tanika (Demetrius) Lynch, Tenetta Hutchinson, Tierra Hutchinson, Deiesha Willis, Jacqueline Robinson, Shakyra Finley-Jones, Khyara Finley-Jones, Laura Finely-Jones, and Reginald Jenkins (a brother from another mother); his favorite aunt, Cheryl Sutherland; aunts: Mary Bride, Shawn Bride, Tonya (Bryon) Norman, Rechelle Burnette, Nichol Burnette and Carletta (Lenard) Kent; his uncles; Keith (Cynthia) Crawford and Christopher Crawford; his grandparents: Shirley and Melvin Williams, Howard and Emma Brown; his mother and father-in-law, Shirley and Marcel Nowell; his God-mother, Beverly Stewart and a host of cousins, nieces, and friends. Micol is preceded in death by his Granny Elise Sutherland, his grandmothers, Lovie Crawford and Eula Underwood; his grandfather, Carl Sutherland and his uncle Ronald Bride.

The family of Micol Jones Sr. created this Life Tributes page to make it easy to share your memories.