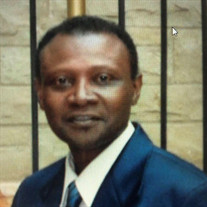 Michael Allen Amaker was the first born to Clarion and Lou Ethel Amaker on April 20, 1963, in Oscoda, Michigan (Wurthsmith Air Force Base). Michael attended the Detroit Public School District until his family moved to Inkster, Michigan. He attended the Inkster Public School District until he graduated from Inkster High School in 1981. He continued his education at Wayne County Community College, then transferred to Benedict College in Columbia, South Carolina, where he received his Bachelor of Arts Degree in Graphic Design in 1987. Michael was a Christian and gave his life to the Lord at a very young age. He attended Word of God Church Ministries, where he was an active member. Everyone who came in contact with Michael always felt his welcoming spirit. He was very kindhearted and loved spending time with family and friends. Michael always had a way of making others feel good about themselves, no matter what they were going through. He was a great spiritual motivator and always talked about his love for the Lord. He would stop in the middle of what he was doing to pray for you. He loved to entertain and would always talk about the experience he had at a James Brown concert at the age of six. It was then, he developed his love for dancing in front of a crowd. In high school, he formed the dance group "Zodiac" with five members including himself. They made an appearance on the "The New Dance Show" and became well known within the Inkster community. He took his talent to Benedict College where he continued the group "Zodiac" with different members. They became the hottest act on campus. He would always say, "he felt like a celebrity down there". After he graduated from Benedict College, he decided to return to Michigan to start his career. Michael worked for Aetna Industries located in Warren, Michigan for fourteen years until they closed their doors. He then started working part-time as a substitute teacher for Detroit Public Schools (DPS). In 2011 Michael began working for Meijer as a stock clerk for many years. Michael enjoyed working, but always looked forward to the weekend. He loved gatherings, he would always plan what he's going to cook and made sure he made enough for anyone that stopped by. When he took out his "Campaign Hat" that's when "LA Mike" came out and you knew there was going to be a party. Michael never married, but everyone knew the love of his life Veraetta "Cookie" Davis who was his queen of his life and Rashawna and Destiny were the daughters he called his own. The children loved him and he had so many he called his "God Children". Michael Allen Amaker went peacefully to his heavenly home on September 6, 2019. He was 56 years old. He was preceded in death by his father, Rev. Clarion Amaker and sister Willie Mae Walker. Michael is survived by his mother Lou Ethel Amaker; sisters: Sandra D. Amaker of Westland, Michigan, Sharon A. Frazier (Tyrone) of Livonia, Michigan, Lucretia Amaker of Southfield, Michigan, and brother Randy K. Amaker of Garden City, Michigan, four nephews (Issac, Brandon, Kevin, & Caleb), brother-in-law, Horace Walker and a host of family and friends.

The family of Michael Amaker created this Life Tributes page to make it easy to share your memories.

Michael Allen Amaker was the first born to Clarion and Lou Ethel...

Send flowers to the Amaker family.